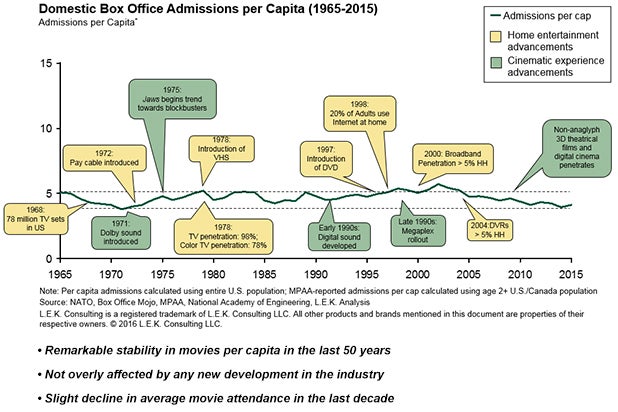 Innovation in home entertainment over the past 50 years has been tremendous. But despite all these innovations – the introduction of video in the 1970s, DVDs in the 1990s, growing broadband penetration and DVRs – Americans go to the movies about as often today as they did in 1965.

That’s not to imply that the film industry is a steady business. While annual box office admissions have held between four and five movies per person for 50 years, a shift of even one movie admission per capita is significant.

You probably know why box office is up – it’s higher ticket prices. 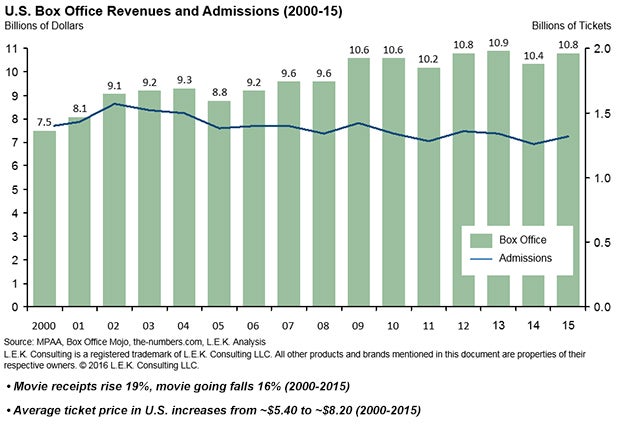 Some have attributed the admissions decline to increasing prices, but a 3 percent price increase per year is in line with other products. So what is really going on?

Despite recent declines in box office admissions, evidence shows that recessions don’t really affect the cinema business. In the below chart, the yellow bars call out the recessionary periods in the last 45 years. The steadily rising gray line is the GDP per capita, showing a relatively steady increase of 1.8 percent per year since 1970. The erratic blue line shows the number of movies attended per person in North America, clearly indicating no correlation between admissions and GDP, or even admissions and recessions. But the sobering final takeaway is the dotted green line that shows that admits per capita is steadily declining at 2.7 percent per year for the last decade, in both good times and bad. 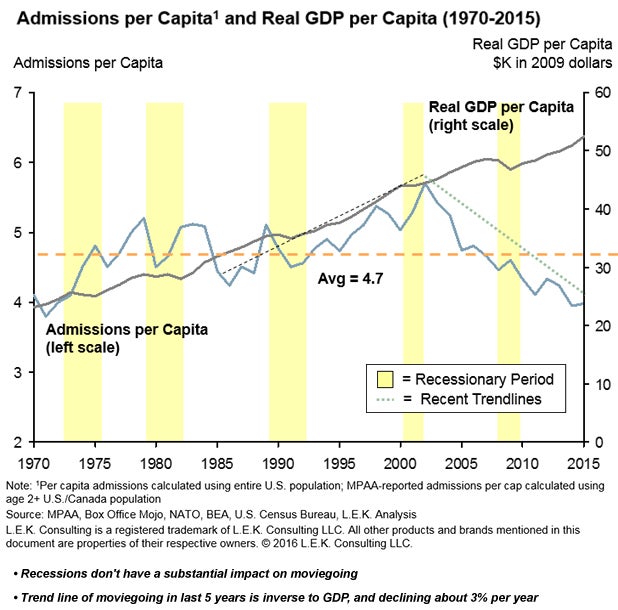 So, what is causing the recent decline?

Unfortunately, the cost of watching a movie in theaters continues to increase (growing at about 4 percent CAGR from 2003 to 2014) while the price of the in-home alternatives like Netflix and pay-per-view continue to fall (decreasing about 12 percent annually over the same period). 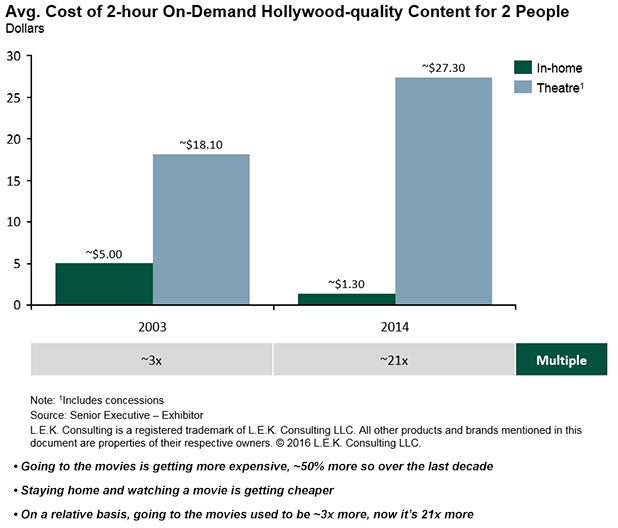 Home entertainment, for its part, has not only gotten less expensive but has also dramatically increased its quality. In 2003, home entertainment primarily consisted of broadcast dramas or DVDs on LCD TVs. Now, consumers can stream critically acclaimed shows from Netflix and Amazon Prime or pop-in a Blu-Ray on their 4K curved TVs.

In order to remain competitive, exhibitors will be forced to address this divergence in costs in the near future. Consumer electronics companies are continually upping the ante on the quality of home entertainment; exhibitors and studios will need to reinvent the theater experience with new product, new pricing and other innovations that we will discuss in future blog posts.

Our next blog post will continue to examine how the movie industry has adjusted its behavior to try and mitigate some of these pressures.

This is Part 1 in a series on box office trends by Dan Schechter, Gil Moran and Michael Kaufman from L.E.K. Consulting’s Media, Entertainment & Technology consulting practice.