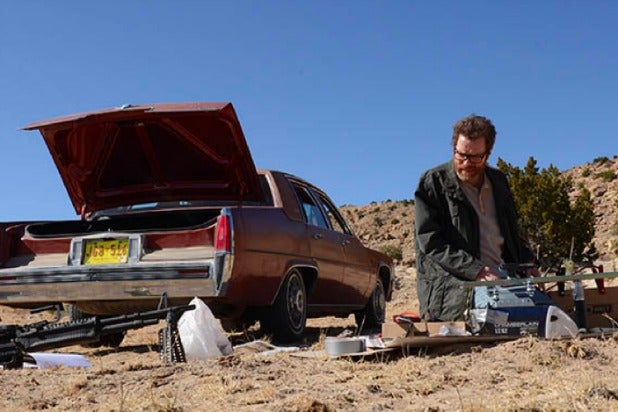 (Spoiler warning: Don’t read this if you haven’t seen the “Breaking Bad” finale.)

Can a finale be too perfect?

It’s a fair question, when things work out relatively well for a meth-cooking multiple murderer. The “Breaking Bad” finale, “Felina,” found Walter White carrying out a brilliant scheme to save his family and his legacy, while killing everyone who threatened them. Your humble correspondent, in a review posted half an hour after the finale, deemed it “just perfect” and the best finale I’ve ever seen. I thought it worked as a crackerjack revenge tale, without letting Walt off too easily.

But Hitfix’s Alan Sepinawall wondered if it was believable that Walter White’s final scheme worked out as well as it did.

“This was cathartic, this was definitive, this was as gorgeously-acted as ‘Breaking Bad’ has always been. But was it ultimately too neat?” he asked. “[F]or the finale to feature Walt largely operating solo (with the occasional small bit of help from Skinny Pete or Jim Beaver) and having everything work out as planned — with the sort of precision one might have expected from the watch Walt left behind at the gas station pay phone — didn’t feel exactly like the kind of ending I might have expected from this show.”

Show creator Vince Gilligan has said before he doesn’t believe TV shows should rely on coincidence – unless they work out against our protagonist. In the finale, a lot broke good for Walt, starting with the discovery of the keys in the Volvo. Now is when we might normally start getting all loopy and imagine that the whole episode was Walt’s dying dream as he succumbed to cancer in New Hampshire. But no. I just think Walt had months to work out every detail of his plan in his cabin, and for once, got everything exactly right. And got a little lucky, after plenty of bad luck before, starting with Hank’s bathroom discovery.

The Onion AV Club’s Donna Bowman, who has recapped the show from the first episode, had a wonderful observation about the mechanization surrounding Walt:

“The theme of ‘Felina’ seems to be this: People and machines are usually predictable,” she wrote. “Lydia meets her business partners like she always did, tears open the only stevia packet on the table like she always does. Gretchen and Elliot betrayed on television how much they fear losing their reputation and their elegant lives, and that means that they can be manipulated. Walt has always used this predictability–this scientific certainty about action and reaction–to get what he wants. But it’s taken him until now to realize the corollary: If you can change your pattern, those predictable people and machines will miss you. Walt changes; he’s the only one who does. After their purpose is fulfilled, the machines stay in motion. The massage chair keeps rolling even though its occupant is dead. The M60 keeps sweeping even though it’s out of ammunition. But Walt’s purpose is fulfilled, and he just stops.”

She also had this eloquent observation: “Many beautifully staged scenes here, courtesy of Vince Gilligan in the director’s chair. I especially liked the frequency with which we see Walt out of focus in the background, leaving a room without fanfare, fading away like a ghost who is done haunting the place.”

Time’s James Poniewozik made the same “Say hello to my little friend” reference that I did, which is probably a testament to how overtly the show set up its “Scarface” homage. He didn’t have a problem with all the perfection. He called the episode “a kind of machine gun of narrative, knocking down all of those questions with auto-fire efficiency. (Well, almost all. Sorry, Huell!) It was not flashy. It wasn’t structurally ambitious, in the way other ‘Breaking Bad’ episodes have been. It was not, in most respects, surprising,” he wrote. “And that’s OK. Because what ‘Felina’ was-as effective, satisfying series finales are — was true.”

TVGuide.com’s Adam Bryant thought the machine gun was perfectly in keeping with “Breaking Bad,” a show that offers cool capers and MacGyver-like machination to go with all its moral hand-wringing. ” It wouldn’t be ‘Breaking Bad’ without one final bit of showmanship,” he wrote. (This is a show that staged a train robbery, after all.)

Also read: ‘Breaking Bad': One Last Guess How It Ends

But Bryant was especially impressed with the moment when Walt dismantled his most meticulous construction.

“At the end of ‘Breaking Bad,‘ TV’s greatest liar finally stopped lying to himself,” he wrote.

Walt’s admission was the key to his slight redemption. But Slate’s Willa Pasin found it ethically troubling that things went so well for Walt after he’s done so much wrong.

“If ‘The Sopranos’ continually punished us for identifying too closely, too sympathetically with Tony Soprano, ‘Breaking Bad‘ in the end protected its audience from the nastier ramifications of this same impulse. For those people who have always thought Walt was not so bad, here was Walt, not being so bad. And for those of us who did find Walt absolutely reprehensible, it was still impossible to watch this episode and feel victorious,” she wrote.

That’s true. And troubling. In the end we rooted for Walt in part because the people he killed were so much worse. Our moral standards were so recalibrated by the end that we just wanted to see the least bad guy win. We cheered as Jesse, murderer, sped euphoric into the night.

Maybe the “Breaking Bad” made us make the same kind of compromises Walt did – the kind we thought we would never make. And made them feel easy.