In today’s roundup of Cannes news ‘n’ notes from around the web, Roger Ebert has his heart warmed and “Blue Valentine” stirs Oscar talk.

The sixth installment of Roger Ebert’s Cannes journal tackles two wildly different films: the “heart-warmer and tear-jerker” (and he means that as a compliment) “Life, Above All,” an Oliver Schmitz drama about AIDS in an South African township, and the obscure, cerebral Jean-Luc Godard exercise “Film Socialisme,” which he addressed before but returns to in order to explain further why it left him so cold. But if you think the fact that he loved the Schmitz and didn’t like the Godard means he’s not comfortable with challenging films, you’re selling Ebert short. (Roger Ebert’s Journal)

Ebert’s additional musings on Godard were prompted by Todd McCarthy’s consideration of the film, which he said failed to engage, amuse or challenge him on any level. “[T]he most common and ominous remark I heard among [Godard supporters] was, ‘I really need to see it again,’” he writes. “I don’t.” (Todd McCarthy’s Deep Focus) 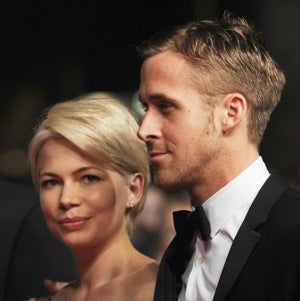 It’s in the Un Certain Regard section rather than the main competition, but Derek Cianfrance’s “Blue Valentine” has quickly become one of the hottest films at the festival. Steven Zeitchik reports on the strong reception to the relationship drama at its Palais screening, and predicts Oscar attention for stars Ryan Gosling and Michelle Williams. “If not,” he says, “it would be the snub of the century.” And we all know that Harvey Weinstein (whose Weinstein Company is releasing “Blue Valentine” wouldn’t allow a snub-of-the-century on his watch. (24 Frames)

(Photo of Williams and Gosling by Michael Buckner/Getty Images)

Time magazine salutes “The Craziness of Cannes” with a photo essay. Billboards, burlesque dancers, shoes, Tim Burton, and acres of photographers. Everything but topless starlets at the beach. (Time)

With only a couple of days left until she heads home, Sasha Stone continues her Cannes diary. This time it’s about sleep (bloggers at Cannes don’t get enough of it), Anne Thompson’s Women in Films panel (the consensus is that female directors have it the worst), “Tamara Drewe” (“just horrid”) and the separation of the press into levels of access (frustrating, to put it mildly). But, you know, if she keeps coming back she’ll get a press-pass upgrade. (Awards Daily)

While a good number of reviewers seem to agree with Stone’s assessment of “Tamara Drewe,” the verdict is not unanimous: Anthony Breznican calls it “a pastry-shop movie” and says “it’s undeniably a pretty full bag of light, fluffy, and sometimes saucy treats.” He also points out that he was hungry when he wrote his review. (USA Today)

Guy Lodge falls prey to the fear of every festival attendee: what if the movie I’ve decided to skip turns out to be the best film of the fest? So he jumps out of bed and rushes to see “Of Gods and Men,” and lasts half an hour before deciding that he should have stuck with his original plan and slept in. But he loves Abbas Kiarostami’s “Certified Copy,” a “teasing, lyrical puzzle-picture” with Juliette Binoche. (In Contention)

The press conference for Kiarostami’s film, meanwhile, began with the director reading a statement that his fellow Iranian, Jafar Panahi, “might be freed today” from the Iranian jail where he’s being held, apparently for making a film deemed to be anti-government. But Kiarostami, reports Brian Brooks, seems to have been mistaken: other reports say that Panahi’s detention has been extended, and that the director – who was invited to serve on a Cannes jury – has begun a hunger strike. “Certified Copy,” its director said, has been banned by Iranian authorities. (indieWIRE)

Director Stephen Kijak talks to Kenneth Turan about “Stones in Exile,” his documentary about the making of the 1972 Rolling Stones album “Exile on Main Street.” The director says he should have been in a band; Turan says the doc is “gorgeously entertaining.” The key, apparently, was a warehouse on the outskirts of London where the Stones keep their stuff, including “Exile” outtakes and boxes full of unused footage from the era. (Los Angeles Times)