In today’s roundup of Cannes news ‘n’ notes from around the web, a five-hour film about the notorious terrorist Carlos the Jackal prompts raves … but also plenty of walkouts.

The big question of the day at Cannes: does “Carlos” justify its five-and-a-half hour running time? Anthony Breznican says yes, it does, although he admits that there were lots of walkouts at the screening he attended. His guess: “That has more to do with weakness of the human body than weakness in the film.” (USA Today) 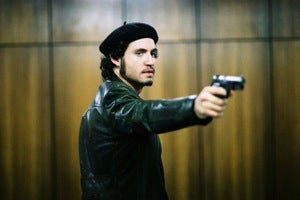 While most journalists who saw “Carlos” came up with quick takes on the film, Todd McCarthy had a detailed review, almost 2,000 words long, ready to go. Apparently he saw the film a couple of weeks ago, then waited for everybody else to catch up. (Hardly in the spirit of much online journalism these days, but good for him.) His verdict: “’Carlos’ is everything ‘Che’ wanted to be and much, much more – a dynamic, convincing and revelatory account of a notorious revolutionary terrorist’s career that rivets the attention during every one of its 321 minutes.” Not only is his the longest review of the film, but it’s almost certainly the most overwhelmingly positive. (Todd McCarthy’s Deep Focus)

Manohla Dargis, on the other hand, admired the film (“something of a heroic endeavor”), but she didn’t swoon. Mostly, it seems, she has some problems with the character of Carlos himself, who she finds short of “depth or nuance” and “essentially uninteresting.” (The New York Times)

Pete Hammond asks: Hey, where are all the Americans? The answer: not in Cannes. At least not in competition – where, he points out, the U.S. has one film competing for the Palme d’Or, Doug Liman’s “Fair Game”; one in the Directors Fortnight, the widely-panned “S— Year”; and one in Critics Week, “The Myth of the American Sleepover.” Plus a few screening out of competition, and more in the film market. That leaves it to the Un Certain Regard entry “Blue Valentine” to represent for the Yanks – which, he says, director Derek Cianfrance’s Ryan Gosling/Michelle Williams drama does quite well. And apparently the movie (or, rather, its distributor, the Weinstein Company) throws a pretty good party, too. (Notes on a Season)

Taking his cue from a British campaign for “real ale” over mass-marketed beer, Roger Ebert suggests a campaign for “real movies.” (Among other things, that apparently means no CGI and no 3D.) Then he reviews some real movies he’s seen at Cannes: “La Princess de Montpensier” (unblinking and romantic), “Un Homme Qui Crie” (original), “Biutiful” (intimate and sharp) and “Poetry” (poignant). “Robin Hood,” he says, does not qualify as a Real Movie. (Roger Ebert’s Journal)

Xan Brooks looks at a festival “simmering with political discontent,” rounding up the political movies (“Outside the Law,” “Countdown to Zero,” “Wall Street” Money Never Sleeps”) and talking to “Draquila: Italy Trembles” director Sabina Guzzanti and “The Inside Job” documentarian Charles Ferguson. “There’s certainly a lot of shady money washing around this place,” says Ferguson, who’s sitting within sight of a lot of very big, very expensive yachts. (The Guardian)

Jeff Wells talks to the director and some of the cast of “Myth of the American Sleepover,” a low-budget, leisurely-paced film about high schoolers that is, in Wells’ words, “much smarter, better acted, more subtle” than the usual teen-relationship movie. It debuted at Sundance earlier in the year, but then came to Cannes for a Critics Week screening and press day with director David Robert Mitchell and many of the actors. The interview is awfully rambling, but Wells’ astonishment at finding a one-teenage-night movie he likes is endearing – even if he writes, “It goes without saying that a teen movie of this caliber is doomed to fail because it’s not coarse or stupid enough.” But then he insists that he’s half-kidding. (Hollywood Elsewhere)

Cannes first-timer Sasha Stone wraps up her coverage of the festival with a long, discursive, introspective, informative, vaguely elegiac and pretty wonderful account of her final full day in France. She covers it all – films, meals, lines, interviews, weather, press badges and lots more – and somewhere along the way even slips in a quiet reference to “The Love Song of J. Alfred Prufrock,” which is just about the most elegant thing I’ve seen any movie blogger do during the fest. (Awards Daily)