It can’t be easy fitting a giant for a tuxedo, but Walt Disney and Steven Spielberg brought “The BFG” to the Cannes Film Festival regardless.

The adaptation of the beloved Roald Dahl children’s book is finally in sight, as Spielberg trotted out his new muse Mark Rylance this weekend, in the title role of a lonely giant seeking company from a young orphan for an important mission.

Long known for his emotional intelligence, this particular film seems like an easy win for Spielberg — though some critics who screened it weren’t that impressed with the effort.

“It’s a charming performance that marries human talent with Spielberg’s technical wonders,” wrote Yahoo Movies. “So it’s a shame, then, that the movie often ends up plodding along like another inhabitant of Giant Country.”

The movie “fills two hours with gorgeous colors and tender exchanges, but it never quite launches into the awe-inspiring territory one might expect from a master of cinematic fantasy,” wrote IndieWire.

TheWrap’s Awards Editor Steve Pond (who finds the “F” in “BFG” vulnerable to serious misinterpretation) said “the movie itself isn’t nearly as delightful as the character, whose sad eyes and crooked grin come courtesy of Spielberg’s new favorite actor.”

Rylance, who won an Oscar for the director’s “Bridge of Spies” three months ago, is the “melancholy heart of an adventure story that to its credit depends far more on that heart than on the pro forma kids-action beats that have doomed many a film in recent years.”

Other reviews, however, said the film recaptures some of the magic of his earlier classics like “E.T.” 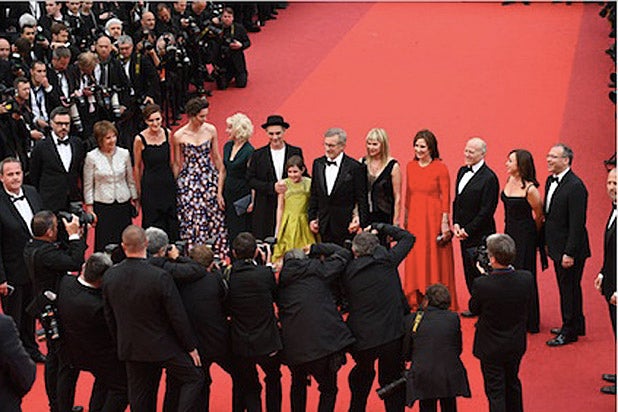 One of the most anticipated moments at this year’s Sundance Film Festival was the first press tour for Lily-Rose Depp, daughter of Johnny Depp and French actress and pop star Vanessa Paradis. She was somehow lost in Utah’s winter uniform and overshadowed by streaming companies buying everything in sight.

Not at Cannes. Lily-Rose appears in debut director Stephanie Di Giusto’s “The Dancer,” and the 16-year-old stunned at photo calls for the project — in no small part thanks to her resemblance to mom and festival juror Paradis.

Depp will next appear in the Natalie Portman indie “Planetarium,” and also serves as a brand ambassador for Chanel (again, same as her mother, decades ago).

Panic at the Hotel du Cap
Heightened security is an ongoing topic of conversation this year, as the festival has added unprecedented private guards on the ground and the entire festival has seen oversight from the French Minister of the Interior.

Not far from festival center sits the luxurious Hotel du Cap, a Cannes institution where moguls  kick back and many an after party is hosted. The likes of Vanity Fair editor Graydon  were dining on the hotel patio on Saturday when a group of men in padded vests sailed by on a motorboat, a black flag waving behind them, according to media reports.

Guests mistook what was reportedly a planned exercise as a terror threat, and panic ensued. French police said the stunt was a not a planned exercise, and later on Saturday a French company called Oraxy took credit for the stunt — though they gave no reason why it was executed in the first place.