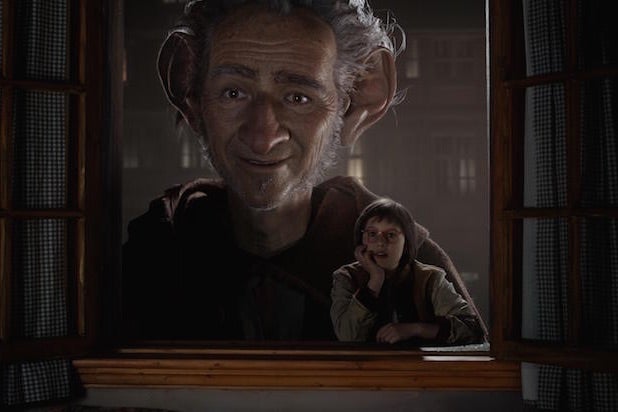 Steven Spielberg + the wonder of childhood. What’s not to love about that cinematic equation?

In fact, there’s a lot that could be scary about it. Sure, the combination worked wonders decades ago with “E.T. The Extra-Terrestrial,” but what about anything from the last 24 years? “Hook” was a bright, frantic mess, “The Adventures of Tintin” was more of the same and the kids took a back seat to the dinosaurs in “Jurassic Park” and its sequels.

And even in his best recent work — last year’s “Bridge of Spies” and 2012’s “Lincoln” — he’s had moments of sentimental Spielbergian overkill that could easily get out of hand when he’s working with material focused on childhood.

So the expectations weren’t exactly through the roof when “The BFG” was announced as an out-of-competition selection at this year’s Cannes Film Festival, even though any new Spielberg film is by definition an event. The veil was lifted on the Roald Dahl adaptation at a press screening on Saturday morning in the jam-packed Grand Theatre Lumiere, with the official premiere taking place later in the day.

And the best thing about “The BFG,” it turns out, is the BFG himself, a collaborative creation of Dahl, Spielberg, actor Mark Rylance and a team of special effects whizzes who bring vibrant life to a massive, genial oaf with a penchant for epic malapropisms.

(By the way, that title: We all know it stands for “Big Friendly Giant,” but doesn’t everybody see those initials and immediately come up with an alternative in which the F stands for something else entirely? Please tell me it’s not just me.)

The movie itself isn’t nearly as delightful as the character, whose sad eyes and crooked grin come courtesy of Spielberg’s new favorite actor. Rylance, who won an Oscar for the director’s “Bridge of Spies” three months ago, is the melancholy heart of an adventure story that to its credit depends far more on that heart than on the pro forma kids-action beats that have doomed many a film in recent years.

Ruby Barnhill is affecting as the orphan Sophie, spirited away by the BFG when she spies him through her orphanage window on the London streets in the wee hours. Unlike his fellow giants, he has no interest in eating her — but he can’t let her tell people about his existence, since giants are pretty adamant that regular-sized human beings –or “beans,” as their fractured verbiage has it — shouldn’t be aware of the big folks.

What happens from there is fitfully amusing, nicely staged and not particularly magical. This is a kids’ movie, to be sure, a little scary but not too much, and it seems unlikely to pick up any awards traction for Spielberg apart from categories like visual effects.

(And even that might not be a slam dunk: While the BFG is a marvelous creation, several scenes in which he carries Sophie around are surprisingly clunky by big-budget VFX standards.)

The film picks up a little momentum late in the game when the Queen of England gets involved (don’t ask how, or expect it to make much sense), leading to a scene of farting corgis that has to count as some kind of perverse highlight.

The applause was warm after the screening — but then, the film screened in front of an audience that cheered all of the company credits at the beginning of the film, behavior more expected of invited premiere guests than cynical reporters.

But the Spielberg brand still carries weight, and in Cannes the director did a reasonable job of showing why. If only “The BFG” was as memorable as the BFG.