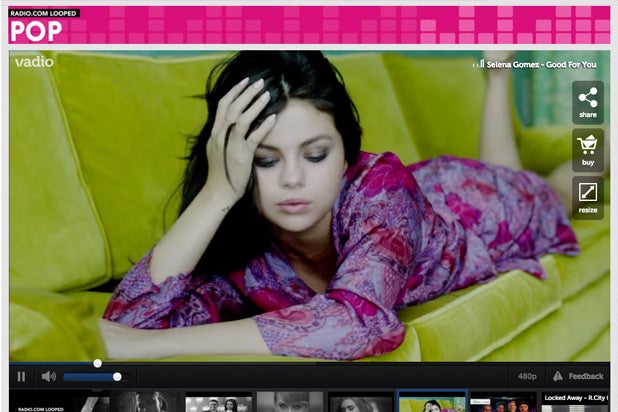 At launch, Looped plays an uninterrupted flow of music videos on three channels dedicated to pop, urban and country genres, peppered with original clips such as artist interviews shot at local stations.

Music videos are among the most popular content on the internet, making them great magnets for viewers — but not necessarily the best business for musicians. Official music videos make up the vast majority of the most-watched clips ever on YouTube. There, owner Google takes a big cut of ad revenue, and some consumers are replacing track purchases with a simple search for that song they have an itch to hear.

CBS aims to take advantage of that popularity by reaching new audiences and amping up the time spent by existing visitors, but it’s extending a friendly hand to the recording industry too. It’s including a click-to-buy option within the Looped stream so viewers can purchase music through Apple’s iTunes.

The combination of music videos with original station content is the first of its kind, said Ezra Kucharz, president of CBS Local Digital Media. CBS Radio is the fifth biggest broadcast radio operator in the U.S. by number of stations, behind iHeartMedia (formerly Clear Channel), Cumulus, Townsquare and Alpha Media.

“We expect some others to follow,” he said of his competitors.

Kucharz wouldn’t specify the terms of its deal to add music videos, other than to confirm that CBS is working with Vadio, a start-up that helps companies port in music videos and tailor the experience to their own audience. CBS has been exploring the possibility of adding videos like this for more than a year, he said, with a goal of reaching new audiences and amping up the time spent by the visitors it already has.