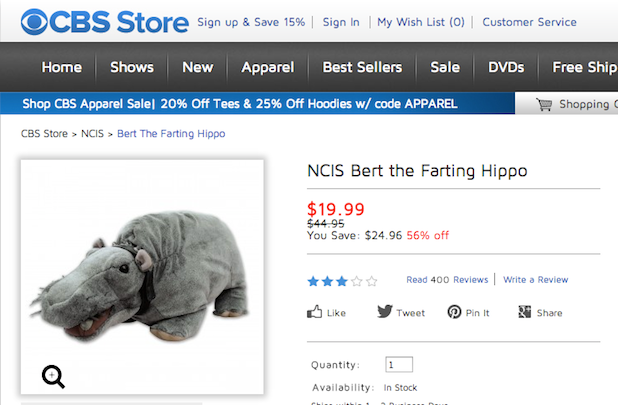 In Hollywood, the land of American reinvention, even the farting hippos have dark, shameful secrets.

It all goes back to 2002, when Folkmanis first produced a “20-inch, three-dimensional, soft sculptural puppet emulating a hippopotamus,” which the lawsuit refers to as Hippo 1.

The next year, CBS got its hands on a Hippo 1 puppet and used it in as a prop in its procedural program “NCIS.” According to the lawsuit, “When Hippo 1 appeared on the CBS ‘NCIS’ show, it was often accompanied by a dubbed sound effect of a fart attributable to the Hippo 1 puppet.” The puppet’s propensity to fart earned it the nickname “Bert the Farting Hippo,” and it became such a favorite that it has appeared in over a dozen episodes of “NCIS” since first gracing the screen in 2003.

In 2006, Folkmanis decided to retire Hippo 1 puppets from its line of merchandise, but soon had Hippo withdrawal. As such, the company decided to create a new version, Hippo 2, in 2009. The Hippo 2 was exactly the same as Hippo 1, except 10 percent smaller.

Also read: Which Is Better, Dick or Fart Jokes? ‘A Million Ways to Die in the West’ and ‘Family Guy’ Writers Declare a Winner

A year later, CBS figured that the Bert had become so popular, they might as well cash in on it by selling farting puppets to dedicated “NCIS” fans. They contracted with Folkmanis to make a new version — one that had a spiked collar and a little internal box that made the prescribed fart sound effect.

For a few years, everyone was happy. Folkmanis’ business was booming; they produced 30,000 farting hippos to CBS to sell in its online store and at other retailers, which meant a nice profit for the network and delighted, fart-loving fans. In 2011, the network even commissioned a smaller farting hippo keychain, so people could take Bert and his gas wherever they went.

Then, everything (allegedly) fell apart.

According to the lawsuit, Delivery Agent Inc., one of the named defendants, teamed up with another defendant, S.F. Global Sourcing, to contact Shanghai Orlind Toy Co., a company in China. Their alleged mission: procure unlicensed Bert the Farting Hippo toys to sell for CBS.

The mission was allegedly successful, which led to CBS selling the China-produced Bert the Farting Hippo toys, and ending its orders with Folkmanis.

This did not please Folkmanis, which is suing the defendants for copyright infringement. They are looking for $733,000, the alleged profit made on the faux-Farting Hippos, as well as piece of the profits made as an indirect result of the infringement. The CBS store still offers many Bert the Farting Hippo products, which include not only stuffed dolls and keychains, but also phone covers, t-shirts, metal signs, slippers, and even a costume for $99.95.

Update: CBS responded to the suit, writing, “We believe this to be a flatulent abuse of the legal system, and we intend to clear the air on this matter immediately.”