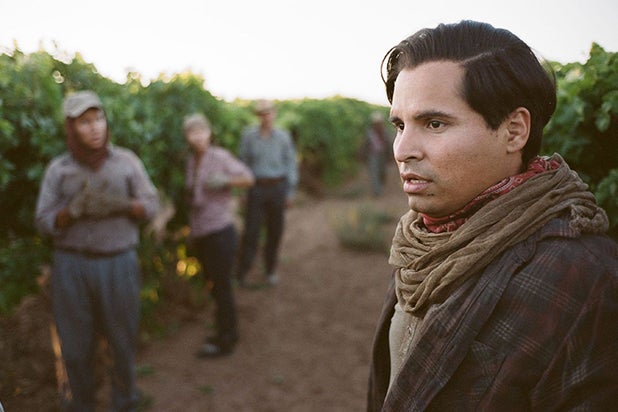 If “Cesar Chavez” is hagiography, at least it’s telling the story of a person who probably deserves it: the eponymous Chavez, a Mexican-American migrant laborer-turned-civil rights activist whose efforts became synonymous with virtually all subsequent worker’s movements.

Wisely avoiding the impulse to deconstruct or diagnose the origins of his lifelong support for organized labor, director Diego Luna instead focuses on Chavez’s creation of the National Farm Workers Association and the establishment of his guiding principles as an activist and organizer. Bolstered by quiet, convincing performances by Michael Peña, America Ferrera and Rosario Dawson, “Cesar Chavez” offers a proletariat fantasy made more powerful by the fact that it’s mostly true.

Peña (“American Hustle”) plays the title character, a lifelong migrant worker who dropped out of school in the seventh grade, spent two years in the Navy at the age of 17, and at 27 went back to the fields to fight for the rights and the safety of the laborers alongside whom he worked. With the support of his wife Helen (Ferrera) and fellow activist Dolores Huerta (Dawson), he quickly establishes the National Farm Workers Association, much to the chagrin of growers like Bogdanovich (John Malkovich) and his son (Gabriel Mann), not to mention white townspeople afraid of seeing people of color assembling.

Advocating a strict program of nonviolence, Chavez builds support for the NFWA, and joins with Filipino unions to stage a protest in Sacramento to force the government to aid their cause. But when Bogdanovich and his cronies break the strikes with scabs and broker deals to sell their crops internationally, Chavez’s resolve is tested when he and his fellow activists are forced to take more dramatic action without violating the principles of their movement.

Where most biopics tend to psychoanalyze their subjects, “Cesar Chavez” refreshingly focuses on what the activist did, leaving only a few potent bits of exposition to provide sufficient motivation for his lifelong crusade for workers’ rights. Luna, working from a script by Keir Pearson (“Hotel Rwanda”) and Timothy J. Sexton (“Children Of Men”), adds few flourishes to Chavez’s campaign, instead letting the activist’s actions speak for themselves. (Luna does intermittently apply a level of 16mm grain to the images for period authenticity.)

In fact, the only time the film’s lack of speculation falls short is in its chronicle of the troubled relationship between Chavez and his son Fernando (Eli Vargas), whose youthful rage clashes with his father’s nonviolent approach. Although Cesar’s wife Helen tries to get him to reach out to Fernando, he never seems willing, and if there’s a deeper rationale — e.g., letting him be his own man — we never fully understand what it is.

That said, the film seldom digresses far enough into Chavez’s domestic problems for them to take away too much of the focus on his efforts as an activist, and Luna mostly handles those potential clichés (like, say, Helen’s potential concerns about spending enough time with his family) with a light touch.

As the iconic labor union champion, Peña makes the most of a rare leading-man role, ably demonstrating how people often demonstrate greater strength by not showing it off. A remarkably versatile actor, Peña demonstrates Chavez’s authority without sacrificing his humanity and showcases the sincerity and conviction of his efforts without reducing him to a cipher.

Meanwhile, as the women in his life, Ferrera proves a formidable, thoughtful companion for Cesar as Helen, while Dawson’s Huerta feels brilliantly utilitarian, a figurehead for the NFWA whose partnership with Chavez speaks quietly, but constantly, to the kind of humane equality and respect that the activist was trying to achieve.

Although it’s probably more effective as a promotional tool for unionized labor than as a truly insightful portrait of the movement’s pioneer, Luna’s film mostly achieves its desired effect: namely, offering an oral history of the plight of farm workers and inspiring the outrage of its inevitably liberal-minded audiences.

But even if its finely-constructed talking points strike a stronger rhetorical note than an emotional one, that still feels like a victory, because if nothing else, “Cesar Chavez” embodies the quiet efficacy of its namesake without resorting to the bombastic theatricality he himself avoided.