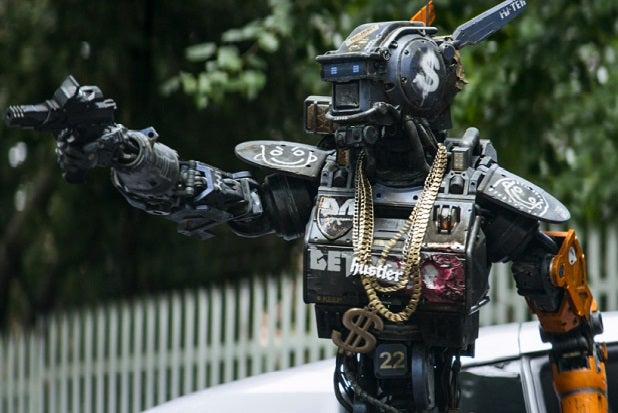 With his third film, “Chappie,” South African-born filmmaker Neill Blomkamp has honed the double-edged sword of his career to a sharp and gleaming edge that wounds his own film.

It’s easy to be carried away by the kineticism and the filmmaking in “Chappie,” as robots and humans engage in pitched gun battles between themselves and each other. It’s also easy to recognize that Blomkamp’s films, each set in near-future riffs on our own society, now represent a groove that is stuck in a rut.

Following “District 9” and “Elysium,” “Chappie” continues Blomkamp’s trend of telling effects-heavy stories about dispossessed underdogs set up to challenge a high-tech corporate state; a box set of these films could accurately and easily be summarized with the title “Fight the Power (in a Motion-Capture Suit).” While it’s certainly nice to see a genre filmmaker engage with social concerns, it’s also worth asking if Blomkamp has literally anything else on his mind to share with the audience.

Set in 2016, the film shows the police in Johannesburg, South Africa, using autonomous humanoid robot ‘drone’ police units to help keep the peace in a violent city. After a tough day on the job, Unit 22 is damaged severely; the designer who wrote the code for the robots, Deon Wilson (Dev Patel) is working off-the-books on artificial intelligence, and appropriates the busted-and abandoned Unit 22 as the shell for his A.I. program to see if his breakthrough will work.

At the same time, fellow robot-maker Vincent Moore (Hugh Jackman) is trying to get more funding for his crime-fighting machine, a larger and more heavily-armed robot under direct human control called the Moose. And bringing together the third strand of the plot, a team of street criminals led by Ninja and Yo-Landi (played by musicians Ninja and ¥yo-Landi Vi$$er of the South African rap group Die Antwoord) kidnap Wilson to see if he can shut off the cop drones with his insider knowledge so that they can commit a life-saving heist with reduced police interference. They acquire Wilson’s newly self-aware Unit 22 in the bargain; he’s soon named “Chappie,” played by Blomkamp stalwart Sharlto Copley through the magic of motion-capture.

Written by Blomkamp and Terri Tatchell, “Chappie” seems like a 2015 riff on several philosophical ideas and plot elements in Paul Verhoeven’s 1987 “RoboCop,” with a judicious amount of gold-toothed faux-“thuggery” sprinkled about like withered parsley on reheated leftovers. Chappie, absorbing everything he is told by Ninja and Yo-Landi, is soon spouting phrases like “Chappie indestructible robot gangster number one!” — marking shades of the robot from the “Short Circuit” movies — with a faulty battery limiting his lifespan so he can shout existential questions like, “You’re my maker; why did you make me so I could die?”

Blomkamp (alongside production designer Jules Cook) creates 2016 Johannesburg as an apocalypse by way of Banksy, with graffiti strewn on crumbling buildings as pitched gun battles break out in the streets.

Also Read: Sigourney Weaver Will Be Back for 'Avatar' Sequels As a Different Character

It’s easy to understand Blomkamp’s concerns in his three films; growing up under Apartheid would be enough to make any person interested in how systems made by human beings come to define other humans (and other beings) as less than human. The question is if Blomkamp has any other stories to tell than sci-fi have-nots vs. sci-fi haves. (Blomkamp is about to tackle a new “Alien” film for Fox nearly 20 years after Sigourney Weaver and most fans finished with the series, delighting both 20th Century Fox shareholders and 20th Century Fox shareholders.)

As for the cast, Patel, Jackman and Weaver are fine in roles as machine-made as any robot: Respectively, the scientific idealist, the violent pragmatist, the cold-blooded CEO. But Blomkamp’s decision to cast musicians Ninja and Vi$$er in their roles is confounding. The two are visually striking, to be sure: Vi$$er has a haircut that suggests she doesn’t own a mirror, while Ninja has tattoos with the kind of profane profusion and placement that suggests no capability for long-term thinking. But dramatically, they’re both inert, giving dead line readings or unmodulated shouting — and worse, it’s hard to not be reminded that Vi$$er and Ninja are not street criminals but rather members of the band Die Antwoord when they keep on wearing clothing with the name of their band on it, not once but multiple times. It’s a failure in basic filmmaking and artistic judgment on the order of Clint Eastwood‘s rubber “American Sniper” prop baby.

Blomkamp earned his name on his first film for wringing mega-effects out of a minimal budget, and he does the same here, pushing every bit of his increased resources to the breaking point with the help of WETA’s techs and artisans. And yet all of the visual rapture in the film — the unleashing of the Moose, the way Chappie’s movements become more and more human — can’t replace the numbing sensation that comes as “Chappie” recycles and riffs on “District 9” and “Elysium” from its opening credits to its hackneyed final shot. Throughout this film, you’ll be told repeatedly in whispers and shouts, that the now self-aware Chappie has feelings. It’s too bad that neither the philosophy nor the pyrotechnics on-screen in “Chappie” can distract you from your own sinking feeling that you’ve seen almost all of this before.