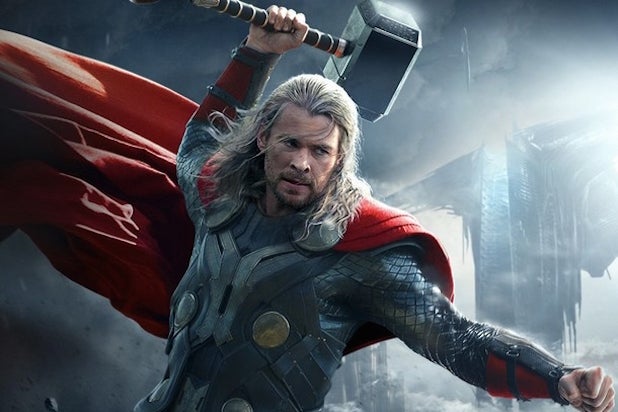 Like the otherworldly Norse god he plays, Chris Hemsworth has a history of bursting onto the screen in heroic fashion.

But “The Huntsman: Winter’s War,” which opened last weekend with a disappointing $19.4 million, marks the latest in a string of big-budget misfires for the Aussie star beyond his appearances as Thor in the Marvel franchise.

Ever since the original “Snow White and the Huntsman” opened four years ago to $56.2 million on its way to a global haul of $397 million, Hemsworth has toplined a string of box office underperformers: “Red Dawn” (2012), Ron Howard‘s “Rush” (2012), Michael Mann‘s “Blackhat” (2015) and Howard’s “In the Heart of the Sea” last December.

The 32-year-old Australian native certainly possesses the look and talent to be a movie star. “No doubt Chris Hemsworth has acting chops and is the finest cut of granite this side of Zeus himself,” Jeff Bock, senior analyst for Exhibitor Relations, told TheWrap. “From an agent’s perspective, he’s done everything right: He has a highly successful superhero franchise, has aligned himself with well regarded directors and dabbles in multiple genres.”

But like many young actors — including just about everyone who has been a title character in a Marvel superhero movie from Chris Evans to Robert Downey Jr. — he has struggled to establish himself as a star who can consistently “open” non-franchise movies on the strength of his own name.

The first sign of trouble for Hemsworth may have been the 2012 “Red Dawn” remake, which grossed $20 million less than its $65 million production budget.

Then there have been his collaborations with Ron Howard. While “Rush” received solid reviews, the $38 million production earned just $27 million domestically. And the $100 million period whaling saga “In the Heart of the Sea” fared even worse — only managing $94 million worldwide.

Few would fault Hemsworth for working with A-list directors like Howard or Michael Mann, whose $70 million cyber-thriller “Blackhat” belly-flopped last winter with a worldwide gross of just $19.7 million.

And he was contractually committed to “The Huntsman: Winter’s War,” which faces an uphill battle recouping its $115 million budget. Not only did the film earn a 16 percent on Rotten Tomatoes but it faced a surprisingly robust challenge from second-week audiences seeking out Disney’s hit “The Jungle Book.”

“Box office prowess, and fame is general, is a wholly intangible concept,” Bock said. “Outside of the Marvel Universe, the films he has chosen haven’t had much broad appeal.”

It didn’t start out that way for Hemsworth. A star on Australian TV, he parlayed a cameo as Captain Kirk’s father in 2009’s “Star Trek” reboot into the bulked-up starring role in Marvel’s “Thor” in 2011.

That film earned $449 million worldwide, and the 2013 sequel “Thor: The Dark World” reached an otherworldly $645 million. And those returns paled compared to the massive box office for the two “Avengers” movies, in which he appeared as part of a larger, starry ensemble.

Also Read: Joss Whedon Admits He Felt 'Beaten Down,' Like a 'Miserable Failure' After 'Avengers: Age of Ultron'

“The challenge for him will be to expand beyond [the Thor] character,” Bock said. “And right now, it’s proving very difficult.”

His first post-Thor projects showed promise, including “Snow White and the Huntsman” and Joss Whedon‘s buzzy indie horror-comedy “Cabin in the Woods,” which got stellar reviews and made a tidy sum of $42.1 million.

But with lackluster returns for his recent non-Marvel action fare, Hemsworth appears to be shifting strategies — and genres. He won acclaim for his small comedic turn in last summer’s “Vacation” reboot as well as hosting stints on “Saturday Night Live.”

And there’s major buzz for his supporting role as an air-headed male secretary in Paul Feig‘s “Ghostbusters” reboot, due in theaters July 15.

After that, he’s solidly booked for at least a year to reprise his go-to big-screen role in 2017’s “Thor: Ragnarok” and two back-to-back “Avengers: Infinity War” movies. Where he goes from there is anybody’s guess.

“The fact that he is more than just a pretty face means Hollywood will continue to present him with new scripts,” Bock said.

And Hollywood is filled with stars who’ve survived strings of flops before breaking out in a big, big way. Just ask Ryan Reynolds.