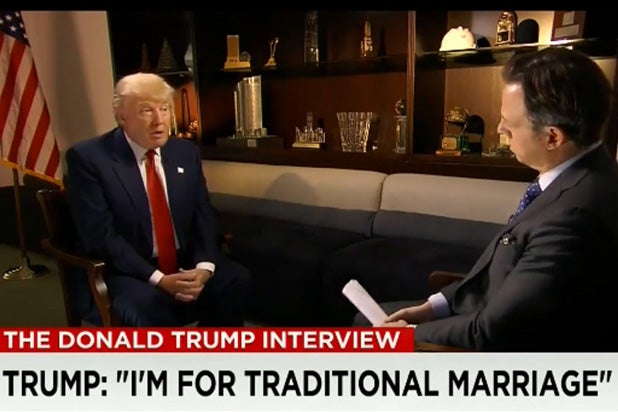 CNN might be renting a permanent suite in the Trump Towers across the street from the Time Warner Center.

New data shows the original cable news network has produced over 2,000 reports about the GOP frontrunner this summer alone.

The Wall Street Journal reported that CNN has done 2,159 reports on Trump since his presidential campaign launched on June 16th. To put the massive amount of coverage in the proper context, the second most-covered candidate was Jeb Bush at 1,087. Ted Cruz ranked third with 416. No other candidate earned more than 400 mentions or reports.

As TheWrap reported, the breathless coverage of Trump has not been sitting well with some of the CNN rank and file. At a network town hall last Thursday, staffers voiced concerns with network chief Jeff Zucker about the amount of oxygen at the network that has been sucked up by the real estate mogul.

Zucker responded, “We’re not perfect.” He also defended a decision to bump an Anderson Cooper special on the 10th anniversary of Hurricane Katrina for an hour-long post-Trump rally analysis, pointing to the strong ratings.

Debate moderator Jake Tapper also defended the network’s coverage, suggesting the question is really why Hillary Clinton and other presidential hopefuls aren’t making themselves as available to media as Trump has.

In the Zucker era, CNN has been criticized for nonstop coverage of missing Malaysia Airlines Flight 370, the Ebola outbreak and Carnival’s “poop” cruise of 2013.

Zucker and top-level executives have basically responded with “too bad” to criticism, saying the network is giving viewers what they want as shown by a spike in ratings from the aforementioned stories.

But in the Trump case, many political media analysts criticize the network — and MSNBC — for inflating the candidate’s popularity and poll numbers by providing him with hundreds of hours of free media.