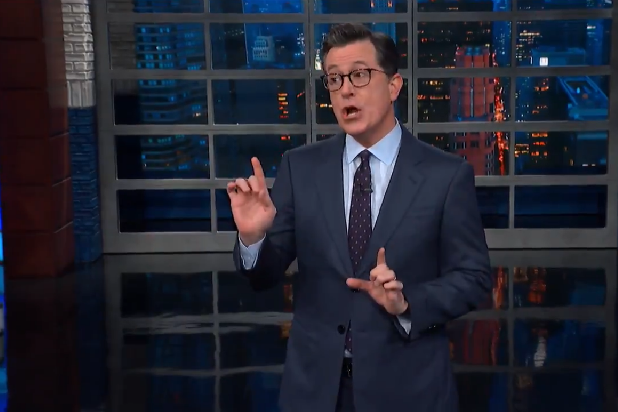 On Monday’s “The Late Show,” Stephen Colbert kicked off his first show after a week off with a look at the just-announced candidacy of Joe Biden, and Donald Trump’s reaction to Biden’s first campaign ad.

Colbert first played a clip from the ad, and quipped: “That’s inspiring. It makes you want to stand up for America’s values … and maybe buy a reverse mortgage.” Then he got to the ad’s main point, which was to call out Trump for his infamous “very fine people on both sides” response to the 2017 white supremacist rally in Charlottesville, Virginia.

As evidence for this, Colbert noted that Biden’s ad provoked a defensive response from Trump. Colbert then played a clip of Trump’s response, in which he said: “I was talking about people that went [to the rally] because they felt very strongly about the monument to Robert E. Lee, a great general.”

Trump thinks you should be honored because you’re a good general, no matter which side you fought on,” Colbert said. “That explains why I went to Erwin Rommel Middle School.”

TONIGHT: Biden entered the Presidential race and he's already got Trump on the defensive. #LSSC pic.twitter.com/3fWIp2DADT