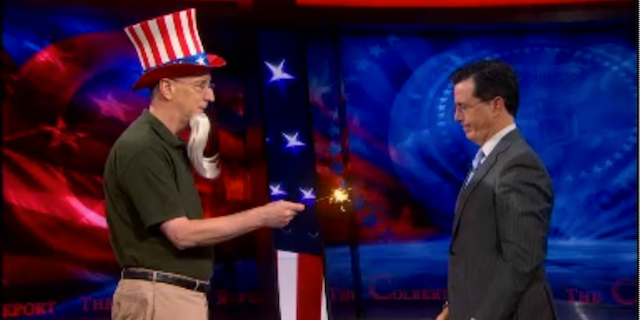 Colbert defended sparklers as a childhood July 4 rite of passage, saying "some of my happiest childhood memories were spent holding a 1500 degree metal rod."

With that, in an act of "civil disobedience," Colbert called out the building's fire safety marshall, Frank, to light a "safe and fun" sparkler. Frank objected to the long false beard he was forced to wear as part of his Uncle Sam costume, but Colbert insisted.

As soon as Frank's sparkler was ablaze, the show cut to "technical difficulties." When it returned, Colbert was apologizing to Frank's wife for her loss.

According to Colbert, Frank's last words were "Damn you, Stephen Colbert! God damn you to hell! Somebody help me!"

Colbert then lit a sparkler in Frank's wife's hand in rememberance of her husband. The show cut to "technical difficulties" again.

When it came back, Colbert was handing out sparklers to Frank's grieving orphaned children to make them feel better.