It’s a new entertainment world out there.

Neither the broadcast television network NBC nor the major movie studio Universal could have garnered less enthusiasm from Comcast CEO Brian Roberts and COO Stephen Burke in their discussions with analysts and journalists all day Thursday.

Indeed, the most striking thing about the executives who unveiled their marriage of Comcast and the entertainment company on Thursday was their utter disinterest in what used to be the sexiest parts of what they’d just agreed to buy: NBC and Universal.

Instead Roberts crowed over the opportunity to expand his cable empire, praising NBCU chairman Jeff Zucker for using NBC content “so beautifully to leverage it into the cable programming business.” 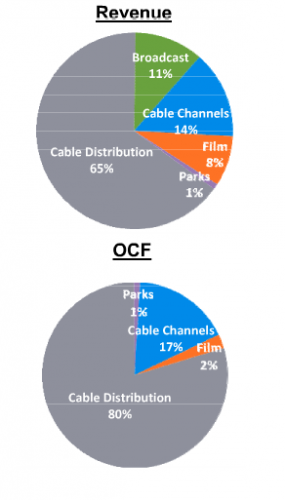 Roberts said several times in the clearest of terms that the reason he made this deal was to buy NBC-Universal’s cable assets. That’s where the cash flow is, that’s what will finance the purchase which will require taking on $9 billion in debt.

The business “will self-scale by combining it with NBC Universal,” said Roberts. “Cable is the fastest growing part of our business — it’s a dual revenue stream. It’s fabulous on the internet, digitally, and it’s driving a lot of growth and value.”

The numbers tell the story of the devastating fall from grace of the television and movie business. Two executives close to the deal confirmed that NBC was valued at zero for the purposes of the financial analysis.

A look at Comcast’s own projections for revenues and operating cash flow (ocf) show bear this out, and show only slightly more confidence in Universal. (see chart) The slides presented to investors on Thursday gave the movie studio only 2 percent of the chart of projected profits, theme parks 1 percent and television … nada.

In the newly configured joint venture, cable will represent 80 percent of Comcast Entertainment’s profits (presuming the projections hold up).

Asked about the movie business during the news conference, Burke gave a weak nod to the home of the “Bourne” franchise, “Meet the Parents” and a steady stream of Oscar contenders from “A Beautiful Mind” to “Brokeback Mountain.”

“Clearly the business is looking to replace the phenomenonal growth of dvds with ‘what next’?” he said. “It’s one of the obvious places we can add value in the home entertainment experience — on demand.”

In other words: The future of the movies is – cable.

Oh yes, he added, and he’d like to pull NBC out of last place.

Even Hulu, NBC’s venture with Fox for watching TV content on the internet, won more praise as a potential area of excitement. Many believe that Comcast will start charging subscription fees for Hulu.

Not so fast, said Roberts. “We think way NBC-Universal is distributing video content on the internet is consistent with the way we’d do it — lots of broadcast content, while being careful about cable content going for free.”

So what does all this mean for synergy? After all, isn’t that the reason that media companies seek to bulk up? Isn’t that why Comcast opted to the studio’s $30 billon value to its own $113 billion in assets?

The executives were more than cagey when it came to talking about that dreaded word. Hollywood and big-bigger-biggest media companies have been badly burned by heavy-breathing investment bankers, eager to pick their pockets. (Line item, deal fees: $1.8 billion!!!)

There is precious little overlap in the business of Comcast, and that of NBC-Universal, said Roberts.

“The fact of the matter is the overlap is very small,” he said, suggesting not to expect many layoffs from Comcast’s 100,000 strong work force, or NBC-Uni’s 30,000. “The real synergies are all ideas we have for innovation and products and growing things. There isn’t much (duplication) here.”

We got the message. It’s the cable, stupid.