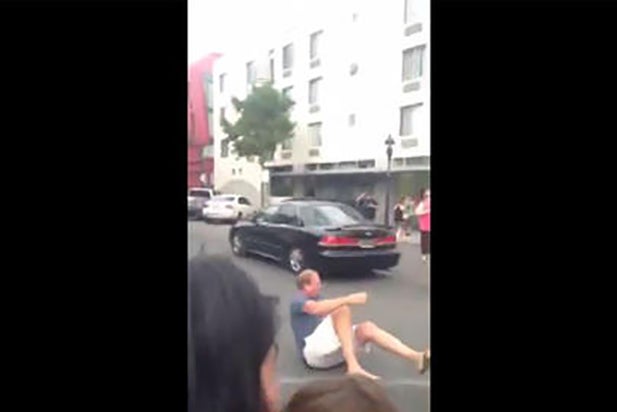 At least two pedestrians were struck by a car on Saturday in San Diego during the Comic-Con Zombie Walk, and the terrifying incident was caught on tape.

A video posted on YouTube shows a man and a woman in a top — who were not believed to be part of the zombie march — falling under a black sedan.

A deaf family with small children was inside the vehicle when it slowly rolled through a large crowd of pedestrians, the San Diego Police Department said in a statement given to TheWrap.

The incident happened as Zombie Walk participants lined the streets near the corner of 2nd and Island Avenues just after 5:30 p.m., police said.

The deaf family was waiting for the Zombie Walk participants to cross the street, so that they could proceed.

But after several minutes, “the 48-year-old male driver slowly rolled forward trying to get out of the area,” the SDPD statement said, adding that the man’s children “were afraid of the crowd.”

Several people from the crowd of zombies and other pedestrians then “surrounded and began punching the car,” police said. The attack left the vehicle’s windshield shattered.

During the chaos, a 64-year-old woman was struck and “sustained serious arm injuries when she fell under the car,” police said. The man’s condition was not known.

“The crowd then chased the car on foot as the family drove toward a police officer down the street,” police said. The driver stopped and told police what happened.

The SDPD traffic division is investigating. So far no arrests have been made.

Comic-Con is an annual festival that brings more than 100,000 movie and TV fans to the heart of San Diego. The Con takes place at the San Diego Convention Center, a sprawling building in front of the city’s busiest thoroughfare in the downtown area. Pedestrians converge by the hundreds along the crosswalks, causing frequent traffic jams.

Watch the video of Saturday’s Comic-Con collision below: