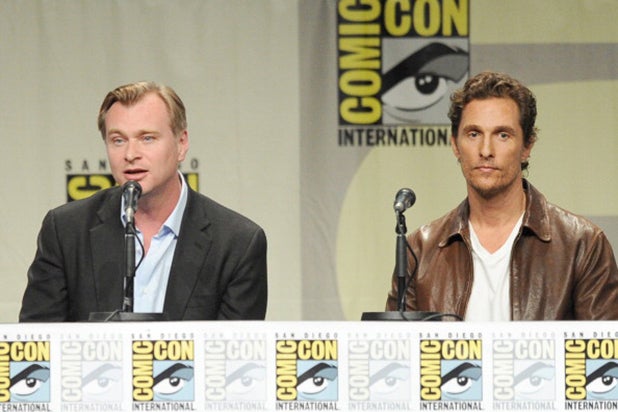 Christopher Nolan has made three Batman movies, but he had never visited Comic-Con until Thursday, when the director made a surprise appearance to promote his upcoming film “Interstellar.”

Nolan appeared alongside the film’s star, Matthew McConaughey, a fellow virgin at the year’s preeminent fan convention. What caused the secretive Nolan to emerge from his shell?

“I wanted to see what all the fuss is about,” Nolan said, to much applause. His last four movies have all opened over the summer, complicating any trips down to San Diego.

Though Nolan and McConaughey declined to go into great detail about the movie’s premise, Nolan offered this to the eager fans:

“I grew up in a time when to be an astronaut was the highest ambition. The idea we’d keep exploring space, pushing further and further out, seemed inevitable. I felt that had fallen off greatly over the past couple of decades.”

His brother Jonah Nolan wrote a script positing that “we’re on the cusp of a brand new era of exploration.” Perhaps the Nolans have been reading up on Elon Musk, Jeff Bezos and the new space race.

McConaughey described his character as a pilot who dreams of being a pilot again and gets the chance to participate in the greatest mission in the history of mankind.  Nolan sought out McConaughey for the part at the beginning of the actor’s recent run of great work — which earned him an Oscar for the “Dallas Buyers Club” (and could soon net him an Emmy Award for “True Detective”).

Also read: Woody Harrelson on His Emmy Nomination: Thanks, But I’m Voting for Matthew McConaughey

The Texan was effusive in his praise for Nolan, singling out his ambition.

“He’s a man whose reach constantly exceeds his grasp,” McConaughey said. “With this film, that’s true. This is by far the most ambitious film Nolan has ever directed.”

That is saying quite a bit as Nolan’s Batman films established the darker tone for all of DC’s future movies, “Memento” influenced countless screenwriters and “Inception” pushed Nolan’s visual trickery to new heights.

Also read: Christopher Nolan on Why ‘Great Gatsby’ Worked, But 3D Isn’t for Him

Nolan described Stanley Kubrick‘s “2001: A Space Odyssey” as the single biggest inspiration for “Interstellar,” while name-checking other major movies from the cannon, such as “Star Wars” and “Blade Runner.”

The Turtles got the most time on stage, as producers Brad Fuller and Andrew Form, director Jonathan Liebesman and stars Megan Fox and Will Arnett all explained their various sentimental ties to the characters created by Kevin Eastman and Peter Laird.

Yet nothing generated more excitement than Nolan and McConaughey, whose surprise appearance may augur similar surprises at later panels by Legendary and Warner Bros., Paramount’s “Interstellar” partners.