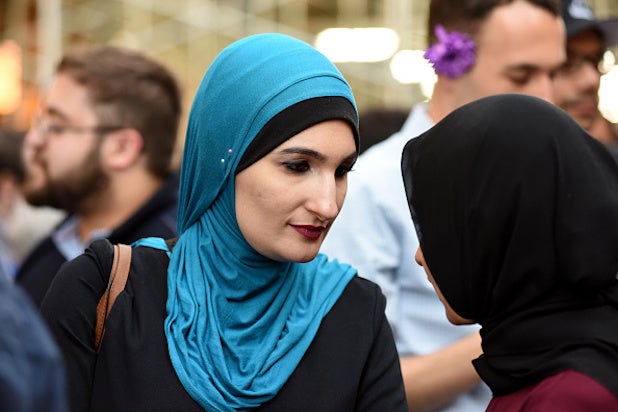 NEW YORK, NY - JUNE 01: Linda Sarsour, co-organizer of the National Womens March and one of TIME Magazines 100 Most Influential People is in the event of M Power Change social organization and the New York State Immigrant Action Fund bring New York Muslim communities together for an Iftar at Trump Tower during Ramadan on June 01,2017 in New York. (Photo by Joana Toro/VIEWpress/Corbis via Getty Images)

Conservatives are freaking out over a speech — rather, a misquotation of a speech — given by Muslim-American activist, Linda Sarsour.

Typically, any mention of  Sarsour’s name is enough to make GOP blood boil.

She’s Palestinian-American, an outspoken critic of the Trump administration, and served as co-chair of the Women’s March on Washington, D.C. But recently, conservatives have gotten extra heated over a short clip of Sarsour’s July 1 keynote speech at a community luncheon in Chicago. In her speech, Sarsour invoked a word that non-Muslims greatly misunderstand and fear: “jihad.”

Right-leaning Twitter is now accusing Sarsour of terrorism and calling for her arrest.

I don't know how YOU define Jihad, but here's how western civilization defines it: pic.twitter.com/Ik7Z8ufDxv

Linda Sarsour is threatening President Trump with "Jihad." She is openly calling for terrorism and needs to be arrested NOW!

Revoke Linda Sarsour's citizenship for threats against the President of the United States and then deport her to Saudi Arabia. pic.twitter.com/i8Od4ThHmc

“She is openly calling for terrorism and needs to be arrested NOW!” one outraged user wrote. “Islamist Linda Sarsour calls on Allah to honor their JIHAD against President Trump at Hamas fundraiser,” fumed another.

Among all this outrage, though, is a lot of mis-information. Here is what conservative Twitter got very, very wrong.

1. That Sarsour spoke at a “Hamas fundraiser.”
Sarsour was actually the keynote speaker at the Islamic Society of North America’s Community Service Recognition Luncheon. The luncheon took place on July 1 in Rosemont, Illinois. According to the event website, it was a gathering of “a prestigious group of the nation’s Muslim leaders, scholars and government officials” to celebrate “an individual dedicated to community service.” This year’s honoree was Dr. Sayyid M. Syeed, the ISNA’s National Director and a prominent leader in the Muslim-American community.

2. The definition of the word “jihad”
Many non-Muslims mistakenly believe the word “jihad” means “holy war,” when in fact, it means “struggle” or “striving,” according to the Islamic Supreme Council of America. “It can refer to internal as well as external efforts to be a good Muslims or believer, as well as working to inform people about the faith of Islam,” the Council said. “Jihad is not a violent concept. [It] is not a declaration of war against other religions.” Also, “The concept of jihad has been hijacked by many political and religious groups over the ages in a bid to justify various forms of violence … Scholars say this misuse of jihad contradicts Islam.”

In her speech, Sarsour quoted a passage in the Quran where the Prophet Muhammad explains that the best form of jihad or struggle is “a word of truth in front of a tyrant rule or leader …” Sarsour followed with, “I hope that when we stand up to those who oppress our communities, that Allah accepts that from us as a form of jihad, that we are struggling against tyrants and rulers…” She then cited “fascists and white supremacists and Islamophobes reigning in the White House.”

Though she did make a not-so-subtle reference to President Trump and his constituents, Sarsour in no way incited violence against them. In using the word “jihad,” she merely encouraged her audience to stand up to discrimination.

The two-minute-long video that is circulating Twitter has been altered to show Sarsour in a negative light. To deflect a lot of the hatred she has received — and to clear up misinformation — Sarsour tweeted out a link to the original video of the speech in its entirety.

Right wing tries to demonize my leadership. Editing videos is their favorite pasttime. My full speech at ISNA https://t.co/4dcfC5pvC4

The full speech was posted to ISNA’s Facebook page on July 1st and is 24 minutes long. You can listen to it here.

The Islamic Society of North America did not immediately respond to TheWrap’s request for comment.

A pop star, an Oscar winner and several rappers all identify with the religion

Friday, May 26 marked the start of Ramadan, a month of fasting in the Islamic religion to mark the first revelation of the Quran to Muhammad. Here are 15 celebrities you might not have known were Muslim.