It’s not really a part of the official Cannes competition, but we have a winner.

“Crash! Bang! Wallow?” has won the sixth NFB Online Short Film Contest, an annual competition for shorts run by the National Film Board of Canada during the festival. The choice was made not by a Cannes jury, but by the public, who had 14 days to vote for the films that showed on NFB’s YouTube site.

More than 20,000 votes were cast, and the films generated more than two million views, an increase of more than 1000 percent over the previous year. 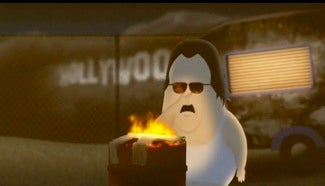 “Crash! Bang! Wallow?,” directed by Jon Dunleavy and Keith Wilson-Singer and narrated by actor David Soul, is the animated tale of an aging stuntman who finds that he’s lost his jobs because of the increasing use of CGI.

Dunleavy and Wilson-Singer will receive a digital camera/HD video camera and a laptop computer from NFB. The awards ceremony was held on Thursday afternoon at the Short Films Corner, a Cannes meeting place for makers of short films.

The second-place film was Andreas Hykade’s “Love and Theft,” followed by Simon-Olivier Fecteau’s “The Technician” and Pierre Ferriere’s “The Story of My Life.”

Other finalists, selected out of entries submitted to the Cannes Film Festival Short Films Corner by filmmakers around the world, were “Mother of Many,” “Forbidden Tree,” Annie Goes Boating,” “Awake,” “The Last Passenger” and “The Report Card.”

All of the shorts can be viewed on the NFB YouTube channel.