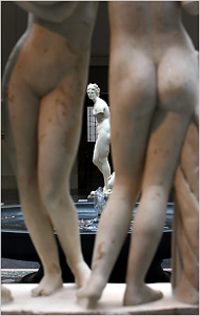 Beautiful. Breathtaking. Inspiring. I was in New York all last week, in part to be present for the opening of the new Greek and Roman galleries at The Met. The galleries, vast and spacious, have made room for no less than half of the Met’s classical antiquities collection, which has been hauled out of mothballs and is now on view, gloriously, to the public. Read NYT critic Michael Kimmelman’s view of the galleries here. The entire week seemed to be consecrated to one gala party, press preview, cocktail visit or another, peopled by the pearl-and-silk crowd of Manhattan. I was there because the Met, and the controversy over some of the antiquities in its collection, will be an integral part of the book that I’m working on, "Stealing From the Pharaohs." The Met is working hard to dispel the notion that there is any shadow of dispute over the provenance of its collection, and that the mission of museums is not in doubt. But it is a subject of debate, and the Met is correct to engage in it. Even now, the museum has on view two pieces it has loaned from collector Shelby White, that the Italian government wants to see returned. Watch this space, more to come on this.