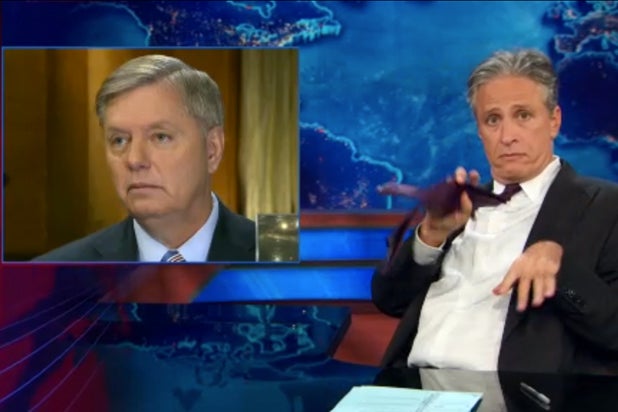 Following the most recent American mass shooting in which a man was able to acquire guns despite several indications that he was not mentally sound, Jon Stewart took on the lawmakers and gun rights crowd that has helped make such easy access to those weapons possible.

“Why is it that guns are the one danger we seem utterly unable to do anything about in any way?” Stewart asked, before showing a clip of Texas senator John Cornyn defending the Constitution and second amendment’s right to bear arms.

“Constitution! Damn it!” Stewart said, before showing a clip of Cornyn from 2006 saying that the nation should be OK with the president and intelligence community doing whatever it needed to keep the nation safe and secure, and stop worrying that civil liberties might be violated in the process.

Stewart also showed Senator Lindsey Graham making the same argument: don’t infringe upon anyone’s right to have a gun, but do give the NSA access to just about everything.

“Oh! So, with guns, the Constitution is ironclad. With terrorism, it’s a list of suggestions,” Stewart said.