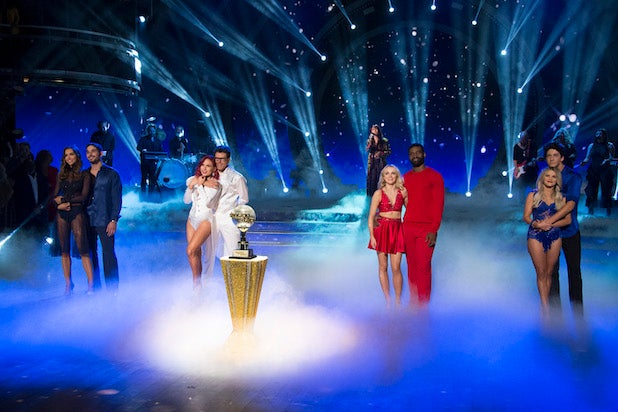 ABC’s “Dancing With the Stars” handed out a Mirrorball on Monday, and in return it received a new low in overnight Nielsen ratings.

Let’s be very fair to “DWTS” — this was Season 27 we’re talking about. Plus, last night was still a season-best and the show’s numbers brought its home network to a tie for first place in the key adults 18-49 range and made ABC the outright winner in total viewers. Find out your winners here.

The dancing competition had set a new fall finale low in ratings last year, when it posted a 1.4 rating/5 share and had 9.2 million total viewers, per Nielsen’s fast-national ratings. This time around, it settled for a 1.3 and 8.6 million viewers.

Also Read: 'Dancing With the Stars' Season 27 Finale: And the Winner Is...

It’s important to note that ABC had NFL preemptions in both Kansas City and Los Angeles Monday night, so those “Dancing” numbers are likely going to be inflated and come down when final numbers come in later Tuesday.

ABC and NBC tied for first in ratings, both with a 1.3 rating/5 share in the advertiser-coveted 18-49 demographic, according to preliminary numbers.

Univision and Telemundo tied for fifth in ratings, both with a 0.4/2.

Univision was fifth in viewers with 1.5 million, while Telemundo was sixth with 1.3