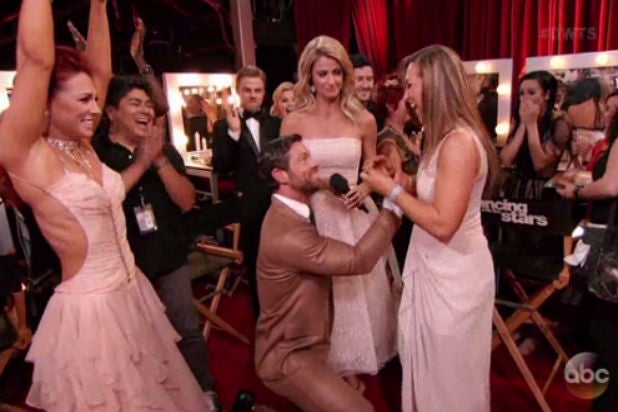 It’s coming down to the wire for the contestants on “Dancing With the Stars,” but before the judging began on semi-finals night, Noah Galloway had a question of his own.

The veteran and double amputee popped the question to his Army Reserve specialist girlfriend, Jamie Boyd, live on the ABC show Monday as he presented her with a diamond engagement ring after dancing to “Time of My Life” from the movie “Dirty Dancing.”

“The song, the ‘Time of My Life’ … you’ve given it to me,” Galloway told Jamie backstage with Erin Andrews, before dropping down to one knee to ask her to marry him. “I’ve got to do this here.”

Luckily she said yes, and now Galloway can put the smooth dance moves he’s learned on the show to good use on their wedding day.

Meanwhile, Season 20’s most famous family was the focus of a special video about Rumer Willis, featuring interviews with her sisters Tallulah and Scout, along with parents Demi Moore, Bruce Willis. “She looked like a magical elf” when she was born, Moore said.

As for the cyber bullies who called Rumer “ugly” and compared her to Mr. Potato Head: “There really wasn’t anything I could do to stop it,” the “Charlie’s Angels: Full Throttle” actress said. “Her self esteem was nothing. I could only just keep loving her and loving her until she could love herself.”

Unfortunately, all the parental support didn’t help the frontrunner and Rumer slipped from the top spot as Riker Lynch and Nastia Liukin tied for first place.

Rumer and Val’s Viennese waltz was deemed “steamy” and romantic, but their next  “Swan Lake”-inspired dance didn’t score so well.

The eliminations take place Tuesday, ahead of the series finale on May 19.