The Punisher is coming to town in Season 2 of “Daredevil,” and Netflix has released the first look at Matt Murdock’s showdown with the vigilante.

And based on the new still (below) that Entertainment Weekly published online Tuesday, it doesn’t look like things go well for the blind superhero (Charlie Cox), as he’s down on the ground and chained up at the feet of the new character played by Jon Bernthal (“The Walking Dead”).

“Viewers watching the show will be rooting for this guy with a gun but we’re also going to force people — the way we force Matt — to second-guess themselves,” Doug Petrie, one of two new showrunners, told EW. “Taking lethal justice into your own hands in America in 2015 is tricky shit. We have not shied away from the rich complicated reality of Now. If you’ve got a gun and you’re not the police you’re going to incite strong feelings. We’re stirring the pot and we’re aware of the headlines where we live and we’re trying to get people to think.”

Fans of the Marvel series can also look forward to more action.

“The advantage of any sequel is you can dive right in,” Petrie said. “We hit the ground running and then we ran as fast as we f–king could.”

Take a look at The Punisher, a.k.a. ex-Special Forces soldier Frank Castle, proving to Daredevil he’s a worthy adversary (or ally?) below. 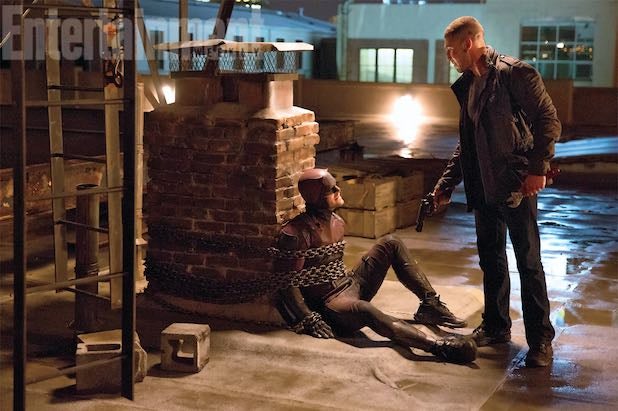