The first casting for Rian Johnson’s upcoming “Knives Out” sequel has been set, as Dave Bautista will join Daniel Craig in the Netflix mystery film, according to multiple individuals with knowledge of the talks.

The signing comes two months after Johnson signed a $400 million-plus deal to write and direct two sequels to the Oscar-nominated murder mystery film, with Craig returning as ace detective Benoit Blanc. Johnson will also produce with partner Ram Bergman, with shooting set to begin this summer in Greece. This is the second time Craig and Bautista will have appeared onscreen together, having previously co-starred in the James Bond film “Spectre.” 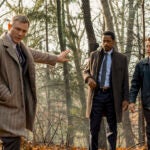 Bautista has already built connections to Netflix, as the streamer is set this week to release “Army of the Dead,” a zombie heist film starring the “Guardians of the Galaxy” actor and directed by Zack Snyder. He is also set to appear in Denis Villeneuve’s “Dune” this November, Marvel’s “Thor: Love and Thunder” in 2022 and “Guardians of the Galaxy Vol. 3” in 2023.

Bautista is repped by CAA and Meisner Entertainment Group. The casting was first reported by Deadline.