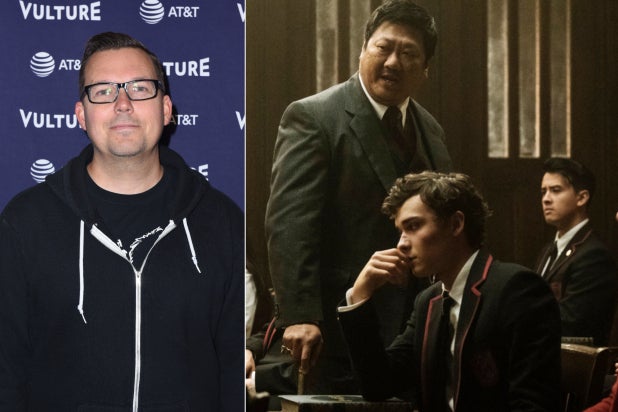 (This article may contain spoilers for the premiere episode of Syfy’s “Deadly Class,” which the network released online in December.)

Rick Remender is getting to do what very few comic book or novel writers get to experience: Adapting their own work for television.

Remender, who serves as co-showrunner on the Syfy series, noted the significance of being the one to shepherd the move from the page to the screen. “The initial voice and the initial spark can often get lost in adaptations,” he told TheWrap, going as far as to say that when he was shopping it around to studios, not being heavily involved was a deal-breaker.

“I was OK with a showrunner coming in,” he continued, but added that as they were developing it they never found someone who could helm the series while maintaining his original voice from the comics. So he just did it himself. “I just kept doing the job and eventually just took the job over.” He was eventually joined by Miles Orion Feldsott and Mick Betancourt as his co-showrunners, as well as “Avengers: Endgame” directors Anthony and Joe Russo, who serve as executive producers.

Remender argued the biggest significance of being able to lead the creative vision for Syfy’s version is to ward off any changes, which are typical when moving a story from one medium to another, that would corrupt what made the story worth adapting in the first place.

“If we’re moving it forward and clearly making things better and there’s a logical reason to do it, then we’ll make a change,” he said. “If it’s lateral or backward, I’m here to protect the intention of the property. I’m here to protect what I liked about it and why I created it.” But he admitted that, with the help of the Russo brothers, he ended up making one key change in regard to Saya (Lana Condor) from his original version.

“In the book, Saya killed the police officer who’s about to execute Marcus (Benjamin Wadsworth). When we filmed that in the pilot, and we’re sitting in editing, and Joe and Anthony said, ‘I’m not sure if we like Saya after this,'” Remender explained. “Because I had lived with that story beat for so long I had never scrutinized it, but once I did, it was clear that it had to come out of the cut.” He further explained the decision as a result of the different mediums. In a comic, for example, you can draw something in a way that makes it appear less visceral, but on screen, seeing Saya coldly executive a police officer comes off too harsh for a character the audience is supposed to root for.

“It did make me feel like Saya was too brutal,” he admitted.

But there was one aspect of the comics that simply had to stay put: The late 1980s (1987 to be exact) setting. “The youth movements I grew up in have been marginalized or forgotten about,” Remender explained. “I wanted to do what ‘Mad Men’ did for the late ’50s and early ’60s — in terms of snapshotting the era and articulating what things were like then — I wanted to do that for Generation X.”