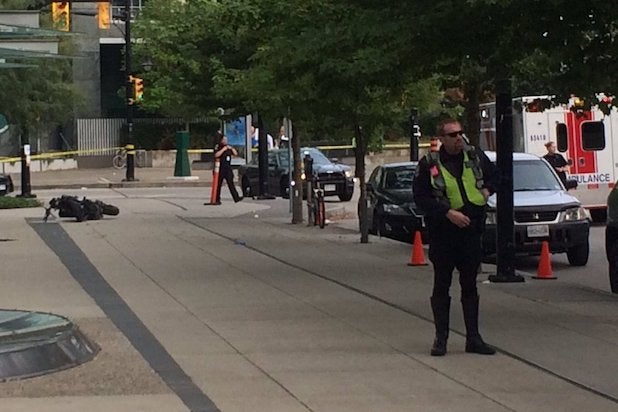 The first official details of a stuntwoman’s death on the set of “Deadpool 2” were released on Friday, revealing the circumstances surrounding the motorcycle accident on the Vancouver, Canada, set earlier this week.

Joi “S.J.” Harris was killed on Monday when she was thrown through a plate glass window after losing control of her motorcycle, according to a preliminary report from British Columbia’s workplace safety organization WorkSafeBC.

According to The Canadian Press, Harris’ stunt involved driving a Ducati 939 Hyperstrada out of the open doors of a building, across a concrete pad and down a ramp that had been built over three stairs before coming to a stop. It was during the first shooting of the scene that her bike continued driving beyond the planned stop and struck a curb.

Harris was performing the stunt for the highly-anticipated sequel to last year’s comic book movie starring Ryan Reynolds. She was standing in for star Zazie Beetz, who plays Domino in the film.

“People were running on the sidewalk, the motorcycle comes flying across the street, looks like from a ramp because it was in the air,” one witness told Global News following the incident. “[The rider was] standing on the bike, slams into that building, clearly hit and out-of-control and clearly not planned.”

Filming resumed on Wednesday after Reynolds led the crew in a moment of silence for Harris.

“Deadpool 2” has been in production in Vancouver since late June. It is slated for a June 1, 2018, release.

From “Deadpool” to “Doctor Strange,” this was a banner year for movies with characters that originated in comic books

While 2016 saw some kickass superhero movies that blew away fans (and the box office), there were also some duds that left some grumbling. Here the year's releases ranked from worst to best.