“Deadpool” dominated the overseas box office this weekend, as the R-rated saga of the sardonic Marvel superhero matched its record-breaking domestic total with an eye-popping $150 million internationally.

“Deadpool” opened at No. 1 in 60 of the 61 markets in which Twentieth Century Fox rolled it out and, as it did in North America, shattered multiple records along the way.

So what country opted for something other than Marvel’s foul-mouthed bad-ass with a bad attitude played by Ryan Reynolds?

That would be Poland, no joke. 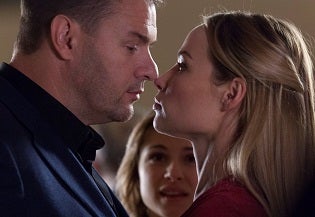 Moviegoers there opted for a held-over and romantic film, “Planeta Singli” (Single Planet). It’s directed by one of that country’s top talents, Mitja Okorn. The film stars Maciej Stuhr as a popular TV host and Agnieszka Więdłochę, whose character is described by the Polish web site Telemagzyn as a “hiding your sexiness music teacher.”

Fox international distribution chief Craig Dehmel wasn’t upset that the rom-com spoiled the otherwise perfect foreign rollout for “Deadpool,” other than noting that Poland was now “on our naughty list.” That’s the sort of magnanimity that making $300 million globally in one weekend brings.

The rest of the world went with “Deadpool,” in a big way. The U.K. led the parade with $20 million. That wasn’t a record, but the film seemed to break them nearly everywhere else. It posted the biggest opening ever in Russia with $12.4 million, topping “Star Wars: The Force Awakens.”

The opening weekend from “Deadpool” was the biggest ever for an R-rated (or the equivalent) movie in 11 markets, including the Philippines ($2.8 million), Singapore ($1.7 million) and Central America ($1.3 million).

Approximately $9 million of the weekend’s international total came from 232 IMAX screens, with records set for the biggest February and R-ratted openings in numerous markets.

This weekend’s openings represent a little more than 80 percent of the international marketplace, with Italy, Spain, South Korea and the Middle East releasing next weekend, followed by Japan in early June.

With Marvel’s ”Deadpool“ on its way to a big weekend, TheWrap suggests other heroes who deserve R-rated films