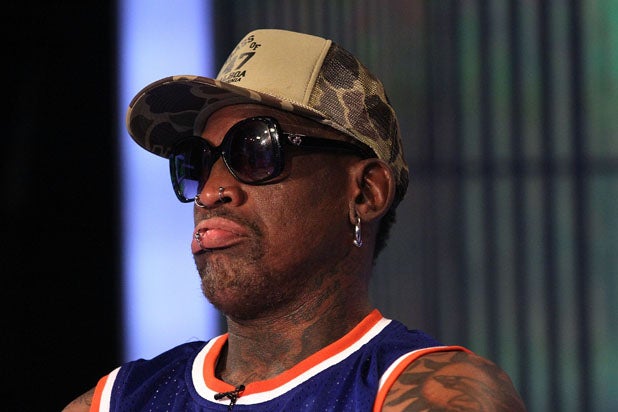 Dennis Rodman is due to return to North Korea on Tuesday, according to CNN.

The NBA Hall of Famer was spotted at Beijing International Airport in China and is expected to travel from there to Pyongyang to meet with North Korean Supreme Leader Kim Jong Un, two officials told the network.

Rodman’s visit comes at a time of heightened tensions between the U.S. and North Korea, which is currently detaining four Americans.

The former basketball star, who was a contestant on Donald Trump’s “Celebrity Apprentice” reality show in 2009, last visited the secretive country in 2014 for the Supreme Leader’s birthday and took part in an exhibition basketball game as a present for the hoops fan.

This will mark Rodman’s fifth trip to North Korea, but he is not going in any official capacity and the State Department was unaware of his visit, a senior U.S. official told CNN.

Rodman has been heavily criticized in the past for ignoring North Korea’s atrocious human rights record and for not assisting in the release of American Kenneth Bae, who spent 735 days in North Korean custody before being released in 2014.

Needless to say, news of his latest trip to North Korea sparked an instant reaction on social media.

Nostalgia for a simpler time, when we thought Dennis Rodman going to N. Korea was the weirdest thing u could ever imagine in world politics

Dennis Rodman is heading to North Korea in an attempt to prevent World War III.

Imagine telling someone in the 90s that Donald Trump would be president and Dennis Rodman would try doing diplomacy in North Korea. https://t.co/rTMuZjZ4WB

We (meaning everyone on Earth) need to stop Dennis Rodman going to North Korea.

Nothing that man can be doing is helping.

Dennis Rodman as international diplomat may seem pretty crazy, but is it that much crazier than Donald Trump in the same role?

Lamar Odom and 13 Other Sports Stars Who Battled Addiction (Photos)

After the former NBA player was found unconscious in a Nevada brothel, TheWrap looks at other athletes whose careers were damaged by drink or drugs