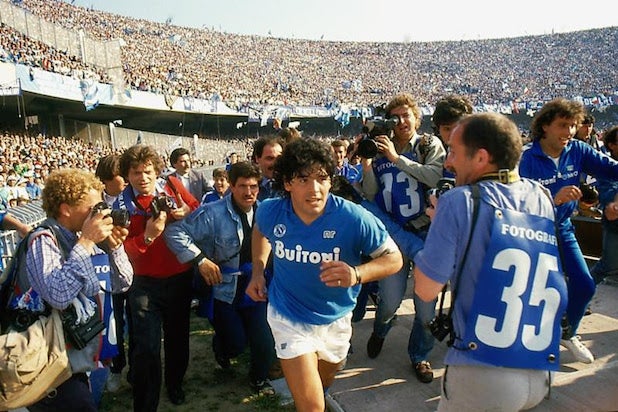 Diego Maradona is still alive. That’s the big difference between the subject of Asif Kapadia’s latest documentary compared to his films “Amy” and “Senna.”

With those movies, Kapadia dared himself to tell their stories entirely through archival material and with no contemporary talking heads, knowing he wouldn’t have access to his subjects. “Diego Maradona” is constructed in the same way, but Kapadia actually met the legendary soccer star, interviewed him and included his voice in the film.

Incredibly, even though he had access to one of the most famous athletes on the planet, Kapadia stuck to his guns and held back from ever showing new footage of Maradona’s face as he is today. TheWrap spoke with Kapadia about whether he was tempted to break that golden rule.

Maradona currently lives in Dubai, and he ultimately sanctioned the documentary that will play in theaters beginning Friday and then on HBO on Oct. 1. But Maradona has a notorious history of being incredibly difficult to reach.

Kapadia told TheWrap that when he first traveled to Dubai to speak with Maradona, he and his film crew of eight people were sent home every day for a whole week and never got the opportunity for an actual interview. It wasn’t until eight months later that Maradona was finally ready to talk and the two finally sat down – with no cameras and only sound recording.

“My producers were drinking the budget in a bar, and I thought this is really a disaster. This is not the way I want to work,” Kapadia said. “I don’t bring an entourage, he doesn’t bring an entourage, and we sit in his living room and we talk. And it’s great. And he’s really open, and he’s actually a nice guy and he’s charming and remembers a lot.”

“Diego Maradona” is set in 1981 when the Argentinian soccer star was already larger than life. He had left Barcelona unable to complete a full season and was signed by Napoli in Italy, a club on the verge of relegation and in a city that was on the brink of economic turmoil. When he won a title for Naples and a World Cup for Argentina, he became not just a star but a god.

Kapadia’s film examines the two sides to the man: Diego, the fun-loving, charismatic kid from a poor, Buenos Aires slum, and Maradona, the godlike talent on the soccer pitch and in the media. So Kapadia’s decision to not show Maradona on camera was for a creative reason as well.

“The reason I didn’t want to film him that way is, the person I’m meeting is at one end of the spectrum of Maradona. The guy I’m making the film about is at the other spectrum of Diego,” Kapadia said. “Is he the most reliable witness to his own story? Even though he’s alive, I’m kind of making a film about someone else who’s no longer with us.”

Kapadia probes Maradona’s drug addiction, his friendship with the Italian mafia and his scandalous affair that produced a love child he ignored for 20 years. Maradona was viewed as a God, but it wasn’t long before he also became the most hated figure in Italy. Prior to asking him about his transgressions, Kapadia was warned by Maradona’s trainer Fernando Signorini that he would be “in the presence of one of the world’s greatest liars.”

“Diego is just famous for being very challenging to get to or get to open up, or to get him to ever admit he’s ever done anything wrong. He’s never done that,” Kapadia said. “You ask him a question about something serious about his son that he didn’t recognize, and he will give you a wonderful, brilliant, eloquent answer for 20 minutes about corruption in FIFA. That’s not what my question was. He’s brilliant at diverting.”

“Diego Maradona” completes something of a trilogy for Kapadia. He’s now made three documentaries about troubled geniuses who burned out young. And all three came from different upbringings, Aryton Senna coming from wealth, Amy Winehouse from the middle class and Maradona from the slums. The director calls it a “tangent” in documentaries that he’s now been on for 12 years.

But there is ultimately one more contemporary shot of Maradona in Kapadia’s film. “Diego Maradona” closes with some cell phone footage of an older Maradona playing a game of soccer along with men and women of all ages. It’s grainy and has none of his former glory, but it’s Maradona.

“I find that really moving, because that’s who he is now,” Kapadia said. “And I find that more powerful than just seeing his face.”