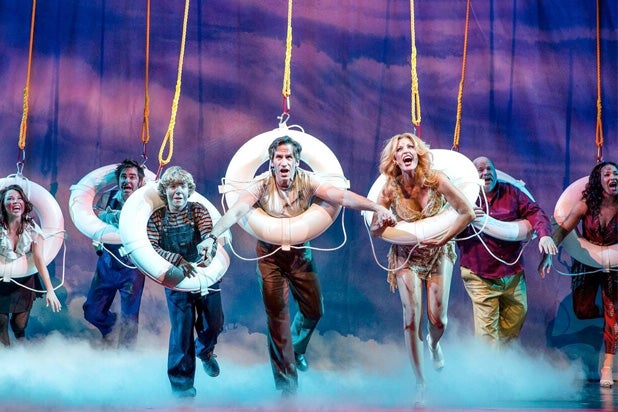 A boat capsizes on Broadway and Irwin Allen turns over in his Hollywood grave. “Disaster” is too dynamic a word to describe the new jukebox musical “Disaster!,” which opened Tuesday at the Nederlander Theatre. Better words would be “lukewarm mess.”

Seth Rudetsky and Jack Plotnick wrote the show, which has had previous incarnations in small theaters around Manhattan. Smaller, not to mention shorter, would help in every way. “Disaster!” sets the story of Irwin Allen’s “The Poseidon Adventure” on a floating casino that’s somehow responsible for creating an earthquake and a tsunami.

The long first act gets bogged down in telling us the “somehow” of that nonsense, rather than getting right to the boat capsizing. Tobin Ost’s set design is appropriately tacky, but other than an invasion of stuffed rats, never is his cheap replication of a spectacular movie special effect in any way amusing.

Rudetsky and Plotnick, who also directs, are wise to give us only snippets of 1970s hits like “Hot Stuff” and “I Will Survive.” In a send-up of the jukebox genre, they jam these songs into the narrative, occasionally to comic effect for about two stanzas. Several songs, like “I Am Woman,” are given fuller treatment, unfortunately.

Occasionally, a performer breaks through the ice of mediocrity to expose real comic chops. Jennifer Simard’s droll nun is a delight. Her making love to a slot machine is the musical’s one showstopper, but she’s given little to do in the second act.