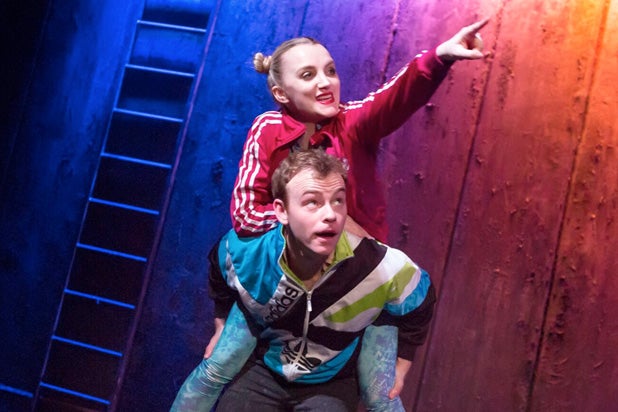 Evanna Lynch (Luna Lovegood of the “Harry Potter” films) and Colin Campbell, reprising their roles from a London production last year, play two 17-year-olds who were born on the same day in the same hospital in the Irish city of Cork — and who have grown up together as quasi-twins.

The pair share private nicknames — Lynch is Runt and Campbell is Pig — and have spent so much time together that they finish each other’s sentences, often in a kind of private language that suggests Walsh read Anthony Burgess’ “A Clockwork Orange” an awful lot as a young man.

The Burgess influence is also on display in Walsh’s depiction of the toxicity of young men and the propensity of Pig toward sudden (and escalating) acts of violence. Campbell is like an Energizer bunny of kinetic energy, running and dancing about a stage that is mostly spare but for the occasionally lulling presence of a TV set.

Lynch, meanwhile, brings some of the mooniness she displayed playing Luna Lovegood on the big screen. Even as she serves as Pig’s main catalyst and egger-on, her Runt comes to recognize the pitfalls of her codependent relationship and the possibilities of a larger world beyond Cork.

By that time, though, it may be too late for Runt to make a clean break. Even Voldemort may be no match for that scariest of threats: a hormonal teenage boy.

John Haidar, who directed the revival in London, keeps his stars in almost constant motion, often to the beat of mid-’90s pop tunes. The strategy is an effective one, bringing “Disco Pigs” in at a fleet 75 minutes and helping disguise some of the shortcomings of Walsh’s early and promising script.