Disney is in on the cusp of grabbing the ultimate wedge of cheese: The company is closing in on 21st Century Fox’s film studio and a portion of its television business, according to CNBC.

The deal, valued at $60 billion, would instantly make Disney “the most powerful company in the entertainment industry,” Ross Gerber, CEO of Gerber Kawasaki Wealth and Investment, told TheWrap.

Disney is expected to get a treasure trove of Fox assets, including its film and TV production units and much of its non-broadcast TV business, including FX, regional sports networks and Nat Geo, among other channels.

The Fox broadcast network, Fox News, Fox Business and Fox Sports would remain with Murdoch-controlled Fox — due in part to antitrust considerations, since Disney already owns ABC and ESPN.

But Fox’s spoils of new film and TV content is much-needed by Disney as CEO Bob Iger seeks to launch the company’s own streaming service in 2019 to compete with Netflix — which will soon cease to be able to use Disney programming, when its current deal lapses.

“To get these [Fox] assets under one roof creates an incredibly powerful content creator, with new avenues of distribution,” Gerber said. “To control the assets —  the [intellectual property], the studios, FX and the other channels — would make Disney the most powerful company in the entertainment industry. And I think Netflix has a lot to be scared of moving forward.”

Also Read: Blac Chyna Slapped With Another Lawsuit Over Her Instagram Photos 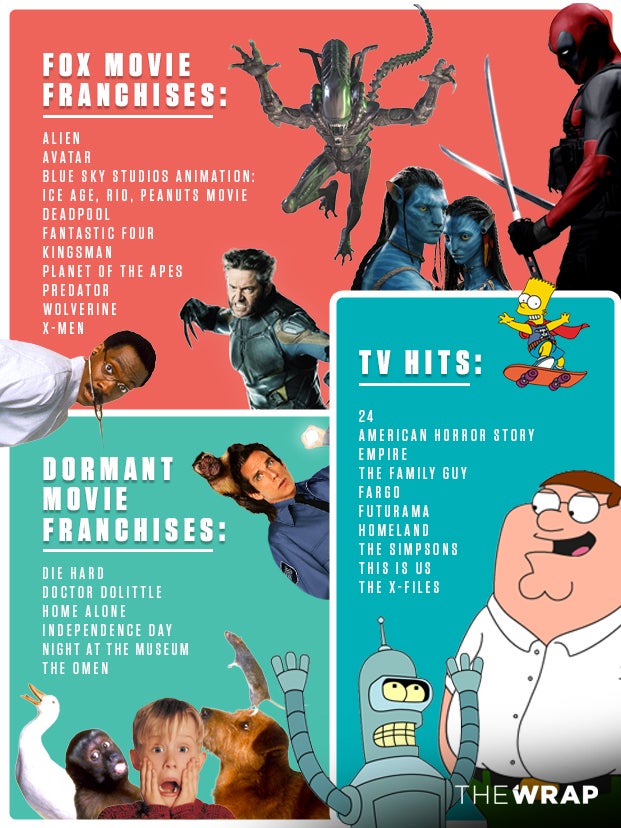 Peter Csathy, chairman of CREATV, a media and tech-focused business development and advisory firm, said that Disney would score by grabbing Fox’s internationally well-known TV shows like “Empire” and “The Simpsons,” along with its evergreen IP like the “Planet of the Apes” and “Alien” movie franchises.

“Fox has great franchises like X-Men,” said Csathy. “X-Men can join Disney with Marvel, Pixar, and ‘Star Wars’ — that holy triumvirate — and really expand the strengths of its exclusive content.”

Csathy — who spends an entire chapter in his latest book, “Media 2.0,” on the brewing battle between Netflix and Disney — said exclusive content is key to building out a successful streaming service.

A Disney-Fox deal could potentially double the Mouse House’s stake in Hulu to 60 percent, giving it a controlling stake.

Maybe that will be the revised strategy, or maybe Disney will stick with its previously announced plan to launch a new SVOD service by 2019. Either way, Disney — which will pull its content from Netflix in two years — has declared war on Ted Sarandos, Reed Hastings and the gang at Netflix.

Some analysts have groused that Disney waited too long to challenge Netflix and its 110 million subscribers. But USC Media Professor Chris Smith told TheWrap Disney could benefit from the “last-mover advantage.”

“They’ve observed how the streaming video market has evolved thus far and they are betting that if they can combine a) the power of the Disney brand, b) a scaled content library (bolstered by the addition of Fox’s assets), network effects from Disney fans who will be afflicted with FOMO (fear of missing out) if they don’t at least sample the Disney service,” Smith said.

Also Read: Kevin Spacey-Less 'All the Money in the World' Screens for Golden Globes Voters

OK, so Disney (theoretically) affirms itself as top dog in this business, and all it costs them is $60 billion — a manageable outlay for a company worth $160 billion. But what’s in this for Fox?

Um, Disney stock, for starters. That’s preferable to shares of Comcast, which has also been circling the same film and TV assets. And for Rupert Murdoch, it allows him to streamline his media empire around broadcast TV, major sports and the Fox News and Fox Business stations that have been his pet projects for years.

“The Murdochs, there’s a reason they’re selling,” concluded Gerber. “Their empire is basically coming down around them. And instead of doing things from a position of weakness, it’s very smart of them to do this.”