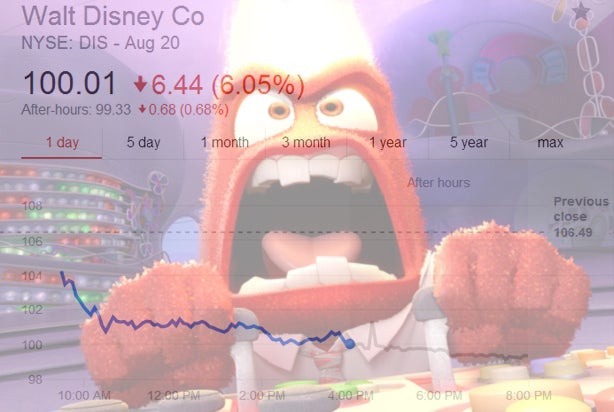 Walt Disney Co. shares dropped 6 percent on Thursday on a miserable day for the stock market marked by a global sell-off.

Some characterized the hit to the media and entertainment segment as an extension of fears about a TV content glut and subsequent cord-cutting.

“We believe this is fair and warranted, because: a) we believe TV advertising is undeniably in secular decline; and b) affiliate fees are now also being put at increased risk. When an industry is undergoing a massive structural upheaval, one major revenue stream is already impaired — and now there are signs the second one may be as well — investors won’t wait for final conclusive evidence to reevaluate how much they are willing to pay for the existing status quo cash flow streams,” Juenger said.

In short: the system is broken, media stocks are overvalued and punishment is due.

David Greenberg, president of Schaeffer Greenberg Advisors and a former board member of the New York Mercantile Exchange, warned on CNBC.com that a market correction is imminent, noting that people overreact when a sell-off like Thursday’s occurs.

“The market is vulnerable. I am not concerned about this short-term sell-off, but I am deeply concerned that the market is setting itself up for a major and long overdue correction,” he wrote.

“But remember,” he added. “Selloffs (like another word that begins with s) happen. And no market goes in one direction forever.”

Technology sector suffered, too, with Apple, Facebook, Netflix and Google taking hits. Twitter dropped over 6 percent, trading below its IPO price of $26 for the first time in its history. TWTR saw a low of $25.92 in the day to end at $26.

The markets tend to experience some volatility in August, some market watchers note — and there’s more to come.