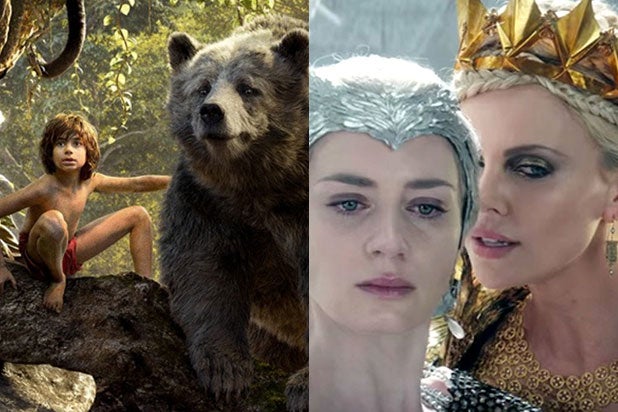 Disney’s “The Jungle Book” will devour Universal’s “The Huntsman: Winter’s War” this weekend, with the latter looking at a mid-$20 million opening.

Jon Favreau‘s adaptation of the Rudyard Kipling classic opened to a massive $103.6 million last weekend, despite initial projections of $65 million. In its second round, box office analysts are projecting a 45 percent drop-off for the CGI-heavy animation film, which would mean around $52 million for the studio.

This drop-off would be similar to 2010’s “Alice in Wonderland,” which opened to $116 million and dropped 46 percent its second weekend. Last year, “Cinderella” declined by 48.5 percent after it debuted to $67.8 million.

“Huntsman” is opening at around $30 million dollars less than 2012’s “Snow White and the Huntsman,” which starred Kristen Stewart in the lead role. However, the first film had a budget of $170 million, while the prequel only had a production budget of $115 million.

“Huntsman” will roll out in approximately 3,788 theaters on Friday, after having opened in 25 markets internationally already. Having grossed $45 million to date, the film will continue its global roll out in 35 territories this weekend, including France, Brazil and China. A release in China is interesting, given that “Snow White and the Huntsman” had no Chinese release in 2012. Perfect World Pictures had a financial stake in the movie.

Chris Hemsworth and Charlize Theron reprise their roles from the first film (which ended up grossing $400 million worldwide), and are joined by Emily Blunt and Jessica Chastain. Stewart will not appear in the film.

Cedric Nicolas-Troyan helms the film in his directorial debut, a fantasy movie about Queen Freya (Blunt) who retreats to a northern kingdom after being betrayed by her sister Ravenna (Theron), where she raises an army of Huntsman to protect her. These huntsman aren’t allowed to fall in love, but Eric (Hemsworth) and Sara (Chastain) do. The war between the sisters escalates, and the lovers must pair up with Freya to end Ravenna’s reign.

“The Jungle Book” still holds the record as the best-reviewed live-action film based on an animated movie on Rotten Tomatoes, with a score of 94 percent. “Huntsman,” on the other hand, is holding a meager score of 16 percent.

“Huntsman’s” box office stint might have little legs as it opens just one week before the highly-anticipated “Captain America: Civil War,” which opens May 6 and is looking at a debut of $200 million.

“With ‘Civil War’ around the corner, ‘Huntsman’ seems like it’s going to be suffocated,” Boxoffice.com senior analyst, Shawn Robbins, said. “And no one could quite expect ‘Jungle Book’ to be as big as it is.”

Michael Shannon and Kevin Spacey‘s “Elvis & Nixon” is opening in limited release this weekend, landing in about 379 theaters. The film premiered at Tribeca Film Festival on Monday night, and is directed by Liza Johnson. Pantelion Film’s “Compadres” will also be released Friday in 350 theaters, as well as Susan Sarandon‘s “The Meddler.”