“Game of Thrones” alum Jacob Anderson has joined the cast of “Doctor Who” Season 13 in the role of Vinder, the actor revealed during the BBC America show’s Comic-Con@Home panel Sunday.

The addition of Anderson, who played Grey Worm on “GoT,” follows the exits of series regulars Bradley Walsh and Tosin Cole after the Jodie Whittaker-led show’s holiday special at the beginning of the year. As previously announced, John Bishop has also joined the cast for Season 13 in the role of Dan.

The new arrivals come after the first big cast change for showrunner Chibnall came in the New Year’s special “Revolution of the Daleks,” in which the Doctor’s father/son companions Graham and Ryan, played by Bradley Walsh and Tosin Cole, chose to end their adventures in the TARDIS.

Chibnall also says that the upcoming season of “Doctor Who” will be a departure from the usual format of self-contained stories in each episode, instead using the entire season to tell a single story. The closest that “Doctor Who” has ever come to this format was during the original series’ 23rd season in 1986, when the Sixth Doctor’s adventures were presented as flashbacks that were part of an overarching narrative in which the Doctor was placed on trial by his fellow Time Lords.

Watch the teaser for the upcoming season in the clip below, and check out the panel via the video above. 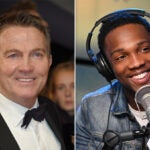