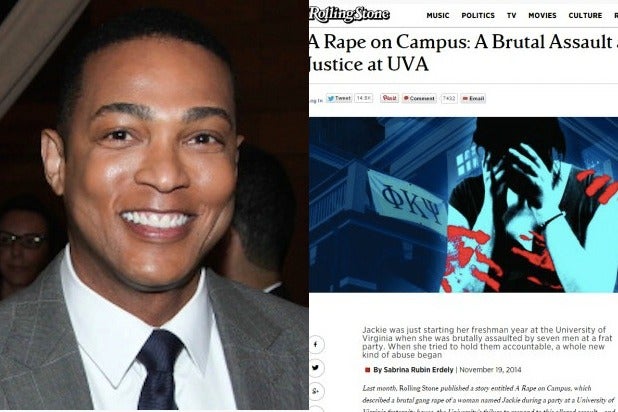 Columbia Journalism Review came out with its worst journalism of 2014 list this week, and some of 2014’s biggest media targets graced the dubious list.

CNN’s Don Lemon, who moved from weekends to 10pmET primetime in 2014, was on the list for his whopper of a question surrounding missing Malaysia Airlines Flight 370 as well as his coverage of the Bill Cosby rape allegations.

On March 20, he asked guests whether Malaysia Airlines Flight 370 could have been swallowed by a black hole: “I know it’s preposterous, but is it preposterous?” He later compared spanking children to training dogs and probed similarities between the release of US Army POW Bowe Bergdahl and the Showtime series Homeland. When an alleged Bill Cosby rape victim appeared on his show on Nov. 18, he lectured, “You know, there are ways not to perform oral sex if you didn’t want to do it…Meaning the use of teeth, right?” Less than a week later, as protests turned violent in Ferguson, MO, he described the scene: “Obviously, there’s a smell of marijuana in the air.” Lemon’s job isn’t easy. But he’s earned a DART for going there. Obviously. -

And Rolling Stone also earned recognition for its now infamous UVA “Rape on Campus Story.” The story, about a female student named “Jackie” accusing a fraternity member of rape, was revealed to have several holes in it.

Rolling Stone has issued several corrections and editor’s notes since its November publication, and announced this week it was tasking Columbia Journalism School with overseeing an independent review of the story.

The disintegration of the magazine’s visceral campus rape story from Nov. 19 wins this year’s media-fail sweepstakes. University of Virginia student “Jackie”’s gang rape tale was heralded as the type of story only Rolling Stone was capable of telling, one that could change the national conversation around contemporary sexual culture. But within two weeks, it began to fall apart. Reporter Sabrina Rubin Erdely didn’t contact the alleged perpetrators of Jackie’s rape, not to mention three of her friends portrayed as unsympathetic to it. It turns out, as reported in a sterling clean-up job by The Washington Post, that Jackie’s account in the story doesn’t match her friends’ recollections of the incident. A number of other key details from the piece have since been disputed or disproved. In its initial editor’s note regarding the story — since updated — Rolling Stone deflected criticism: “In the face of new information, there now appear to be discrepancies in Jackie’s account, and we have come to the conclusion that our trust in her was misplaced.” It deserves a DART for blaming its utter failure on someone else, and many more for all the lapses leading up to it.

Stay tuned Monday for TheWrap’s top 5 media losers of the year. Our top 5 winners is here.