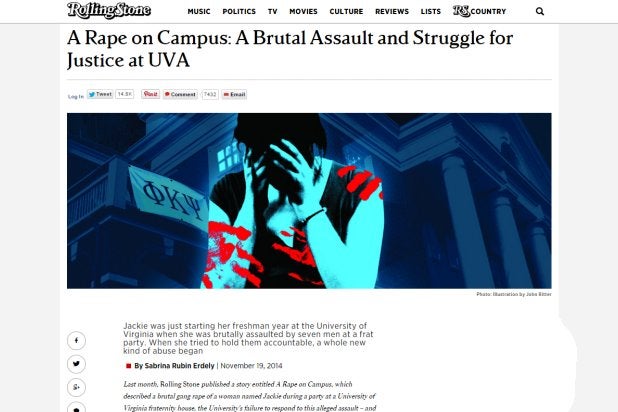 The note, which will appear in the magazine’s next print issue, announced the next step in its internal review of what went wrong with reporter Sabrina Rubin Erdely’s “A Rape on Campus” story.

In RS 1223, Sabrina Rubin Erdely wrote about a brutal gang rape of a young woman named Jackie at a party in a University of Virginia frat house [“A Rape on Campus”]. Upon its publication, the article generated worldwide attention and praise for shining a light on the way the University of Virginia and many other colleges and universities across the nation have tried to sweep the issue of sexual assault on campus under the rug. Then, two weeks later, The Washington Post and other news outlets began to question Jackie’s account of the evening and the accuracy of Erdely’s reporting. Immediately, we posted a note on our website, disclosing the concerns. We have asked the Columbia Journalism School to conduct an independent review – headed by Dean Steve Coll and Dean of Academic Affairs Sheila Coronel – of the editorial process that led to the publication of this story. As soon as they are finished, we will publish their report.

“A Rape and Campus,” which was published on November 19th depicting the rape of a student named “Jackie” by a male fraternity member, sparked global criticism for Rolling Stone after it was discovered there were several inaccuracies and holes in the victim’s stories.

Also Read: Rolling Stone Managing Editor Tweets About UVA Rape Story: ‘The Failure Is On Us’

The author, Sabrina Rubin Erderly, is still a contributing editor with the magazine. It is not clear if she is currently working on other stories.

“We didn’t set a timeframe — they have as much time as they need,” a Rolling Stone spokesperson told TheWrap regarding how long Columbia’s investigation will take.