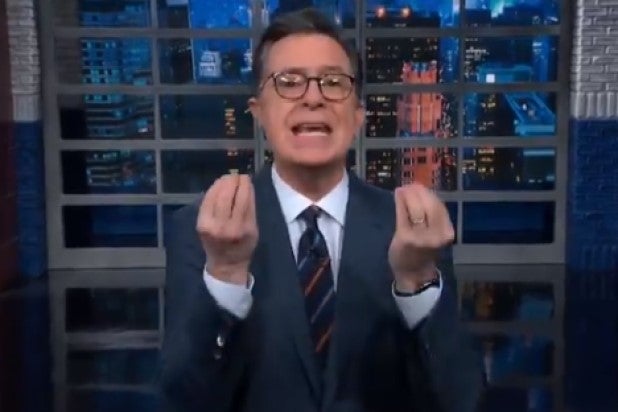 On the eve of the House of Representative’s impeachment vote, President Donald Trump sent a scathing letter to Speaker of the House Nancy Pelosi. In it, Trump called the impeachment process an “illegal partisan attempted coup” and continued to deny any wrongdoing with his dealings with Ukraine.  Trump also accused Pelosi and Democrats of trying to overturn the will of the American people, once again referencing his 2016 electoral college win. And Stephen Colbert can’t take it anymore.

Colbert read from Trump’s letter on Tuesday night, which he prefaced as “a disorienting mishmash of dry legal languaged mixed in with Trump’s signature angry word smoothies.”

“Everyone, you included, knows what is really happening,” the late-night host read, channeling Trump. “Your chosen candidate lost the election in 2016, in an Electoral College landslide (306-227), and you and your party have never recovered from this defeat.”

The electoral college victory is one of the few wins Trump can boast about; his administration has been mired with resignations and criminal investigations, and now he himself may be impeached.

“My God is there anywhere, any occasion he won’t brag about his electoral college win?” Colbert implored.

For the record, Trump lost the popular vote by 2.87 million voters. Watch Colbert’s clip below.