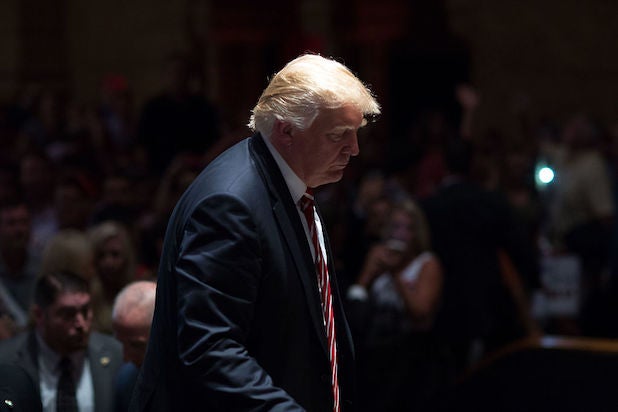 Donald Trump is blaming the media for misrepresenting a Hillary Clinton meme he tweeted over the weekend that many denounced as anti-Semitic since it featured a six-sided star similar to the Jewish symbol the Star of David over images of $100 bills.

“Dishonest media is trying their absolute best to depict a star in a tweet as the Star of David rather than a Sheriff’s Star, or plain star!” Trump tweeted on Monday.

Trump deleted the original meme on Saturday — depicting Hillary Clinton with the star-shaped sign that read “Most Corrupt Candidate Ever!” over a backdrop of $100 bills — after severe backlash and claims of anti-Semitism. The new image replaced the star with a Photoshopped circle.

The controversy escalated on Sunday when it was revealed the original image was previously shared on a white supremacist site prior to Trump sharing it — something that Trump and his campaign have not addressed.

Mic reported that the image was posted on /pol/, a message board for neo-Nazis and anti-Semites, a week and a half before Trump used it in his tweet.

In the thread, the image was uploaded with the filename hILLhISTORY.jpg, the lowercase hh being a abbreviation for “Heil Hitler” among white supremacists.

The image’s creator — who goes by the handle FishBoneHead1 — would often tweet anti-Hillary and racist memes. FishBoneHead1 deleted his Twitter account on Sunday. It’s still unclear if Trump’s campaign obtained the original image from /pol/, FishBoneHead1 or some other source.

Trump, the presumptive Republican presidential nominee, was widely criticized on Saturday after tweeting the image, quickly drawing fire from the Huffington Post and other outlets for the star of David-shaped sign set against a backdrop of $100 bills.

Trump adviser Roger Stone denied the suggestion that the image was anti-Semitic and called HuffPo’s article “horses–” and saying, “a sheriff badge is the same shape as the Star of David.”