Donald Trump began Friday with a busy morning of tweets which included offering effusive praise to singer Lee Greenwood of “God Bless the USA” fame. The only problem? he tagged the wrong one!

“Happy birthday to the great @leegreenwood83,” he tweeted. “You and your beautiful song have made such a difference. MAKE AMERICA GREAT AGAIN!”

Trump (or his staff) noticed the error and deleted the Tweet roughly an hour later, then sent a tweet with the correct tag: @TheLeeGreenwood. 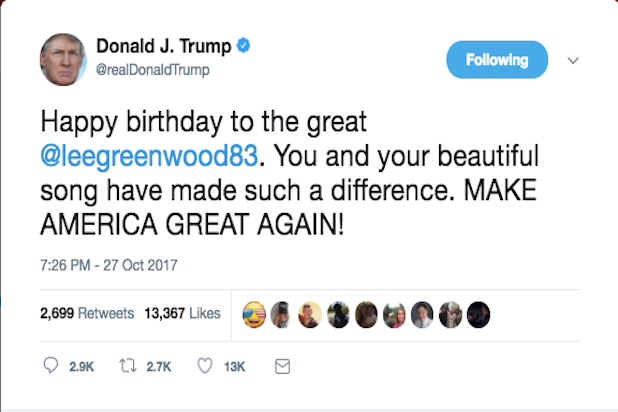 Happy birthday to the great @TheLeeGreenwood. You and your beautiful song have made such a difference. MAKE AMERICA GREAT AGAIN!

According to his Twitter profile, @leegreenwood83 appears to be a lawyer who works in New York City.

As you may have guessed, Greenwood and his 75th birthday got a nice shout-out on “Fox & Friends” on Friday morning, with the show including a liberal dollop of Greenwood belting out his famous song, “God Bless the U.S.A.”

It’s not the first time Trump has accidentally brought fame on random people on Twitter. In august he accidentally retweeted a post which called him a “fascist.”

TheWrap reached out to @leegreenwood83, who did not immediately reply — he did however, offer responses to many others, including CNN anchor Jake Tapper.

I get this a fair amount, but certainly not at this level.