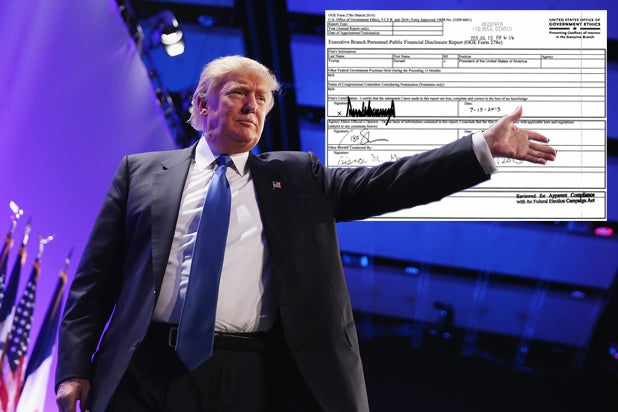 Donald Trump’s financial disclosure forms have been released to the public and the numbers are HUGE.

According to the forms, filed with the Federal Election Commission last week and released on Wednesday, the real-estate mogul and GOP presidential candidate earns income from more than 150 different deals, makes an eye-popping $250,000 per speech and has at least $1.4 billion in assets.

The 92-page document states that Trump holds board positions in 500 different companies and has a wide range of products including water, menswear, mattresses and wine.

Among the other revelations: Trump collected a Screen Actors Guild pension worth $110,228. His wife, Melania, made at least $100,000 from her skin care line.

All in all, Trump made a whopping $9.5 million in royalties from licensing fees which include vodka, energy drinks even his own brand of coffee.

The document provides a rare glimpse into the mogul’s fortune which has been the subject of much speculation over the years.

While Trump has claimed he’s worth $10 billion, Forbes magazine had estimated his fortune at a little over $4 billion.