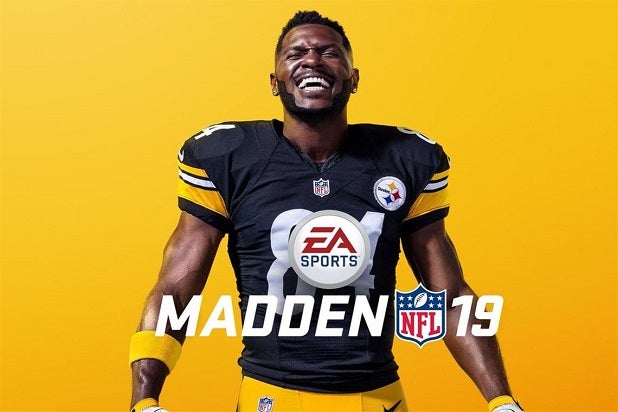 EA Sports has updated its “Madden NFL 19” video game to reinstate Colin Kaepernick’s name in a song on the game’s soundtrack following backlash on social media.

Fans and press with early copies of the game, which releases on Aug. 10, discovered that the former San Francisco 49ers QB’s name was edited out of the “Madden” version of YG’s track, “Big Bank,” on the soundtrack. Players found the song was back in the game this week after EA Sports apologized for the omission, calling it an “unfortunate mistake.”

Author Jean Clervil, who caught and shared the edit on Twitter, posted a clip of the song with Kaepernick’s name back in on Instagram — it previously had been blanked out, with the same edit that was used to remove explicit lyrics. The line in the song goes, “You boys all cap, I’m more Colin Kaepernick.”

it only took my tweet, over 2 million views on social media, pressure from @yg @bigsean #blacktwitter and every major news outlet for you guys to fix something that should’ve never been done @EAMaddenNFL ????????‍♂️ — ✊???? @Kaepernick7 @nessnitty #colinkaepernick #jeanclervil #madden19

Kaepernick has been the center of controversy since 2016, when he began protesting oppression of people of color in the U.S. and police brutality by kneeling during the national anthem at the start of his NFL games. The protest spread in the league, and became a major talking point for Donald Trump and his administration, as well as conservative commentators, who called the protests disrespectful to police, the armed forces, and America in general.

Kaepernick has said he chose to kneel during the anthem rather than stay seated (as he initially did) as a sign of respect to American troops and the flag, while still protesting injustice. Kaepernick officially opted out of his contract with the 49ers at the end of the 2016 season and remains an unsigned free agent.

Also Read: 19 Times Donald Trump and Co. Were Confused About History, Including Canada Burning Down the White House (Photos)

In October 2017, Vice President Mike Pence left an Indianapolis Colts game he was attending when 49ers players knelt during the national anthem. Trump later tweeted that he asked Pence to leave the stadium should anyone kneel. The NFL created a new rule in 2018 requiring players to stand for the anthem, with those who refuse receiving suspensions or fines.

The discovery of the “Madden” omission kicked off complaints on Twitter from “Madden” fans and received widespread media coverage. Rapper Big Sean, whose verse in the song contained Kaepernick’s name, wrote on Twitter he was “disappointed and appalled” by the move, and that no one on his team approved the removal of Kaepernick’s name.

At their Aug. 5 concert with YZ, Big Sean led the crowd in chanting the lyric. “All I gotta say is, they can’t stop us. They ain’t gonna censor us. They’re not going to take any lyrics out of no songs. We say what we mean and we mean what we say,” Big Sean said. Kaepernick later shared a video of the moment on Twitter and thanked the rappers for their support.

I appreciate these brothers for not being silent on this issue!
RP “They ain’t gonna censor us.” YG and Big Sean! ✊????“You boys all cap, I’m more Colin Kaepernick!” #staydangerous #colinkaepernick #yg #bigsean
???? @diskodrew pic.twitter.com/HeFphns0SO

EA Sports released a statement earlier this week pledging to remove the edit of Kaepernick’s name in the song. The video game publisher apologized and said the problem was confusion about rights issues.

“We made an unfortunate mistake with our ‘Madden NFL’ soundtrack,” the statement said, according to a report from Forbes. “Members of our team misunderstood the fact that while we don’t have rights to include Colin Kaepernick in the game, this doesn’t affect soundtracks. We messed up, and the edit should never have happened. We will make it right, with an update to Madden NFL 19 on Aug. 6 that will include the reference again. We meant no disrespect, and we apologize to Colin, to YG and Big Sean, to the NFL, to all of their fans and our players for this mistake.”

But as radio and TV personality Nessa Diab, Kaepernick’s girlfriend, pointed out on Twitter, Kaepernick’s name was also removed from a song in “Madden 18.”

It’s NOT a screw up when you @EAMaddenNFL did it two consecutive years. You scrubbed @Kaepernick7 ‘s name last year on the song “Bars of Soap” and THIS year on “Big Bank.” DID the @NFL tell you to scrub his name out TWICE? https://t.co/dvpfOF3EOF https://t.co/dwnAsHJ8i1

As The Washington Post reported that Kaepernick’s name was edited out of the song “Bars of Soap” even though he appeared in the game — “Madden” players could recruit him to their “ultimate teams,” and Kaepernick was included as a free agent in that game. Kaepernick does not appear as a player character in “Madden 19.”