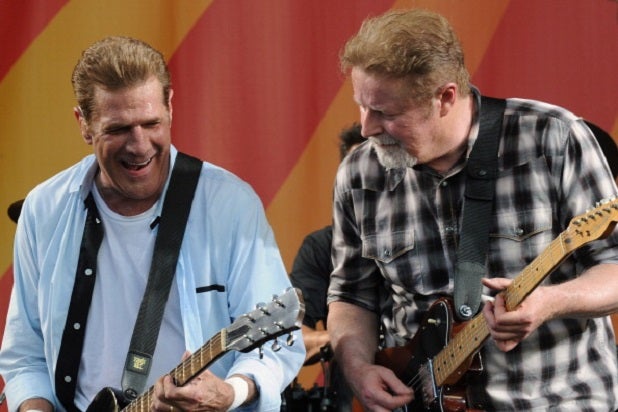 Could the Eagles fly once again, despite the death of founding member Glenn Frey earlier this year?

Despite his previous assertion, Don Henley said in a recent interview that it would be possible for the group to reunite — with one key addition to the band.

Speaking to the Montreal Gazette, Henley said that a reunion might be possible, if Frey’s son Deacon came aboard.

“You know, Glenn has a son who can sing and play quite well. And one of the only things that would make sense to me is if it were his son,” Henley offered, when the possibility of a one-off reunion — such as the tribute to Frey that was performed at the Grammys this year — was broached.

“With Jackson [Browne], of course, we could do ‘Take It Easy’ [which Browne cowrote with Frey] and a couple other things, but the only way I would consider any kind of reunion, I think, would be with Glenn’s son, Deacon,” Henley added.

The musician noted that there “have been no discussions along those lines, and we’re still going through the healing process — trying to get through all of this,” but allowed that “those are things that might happen somewhere down the road.”

The surviving members of the Eagles, along with Browne, did gather to perform in tribute to Frey at the Grammy Awards in February, but Henley told the BBC afterward, “I think it was an appropriate farewell. I don’t think you’ll see us performing again.”

Frey died in January at age 67 of rheumatoid arthritis, colitis and pneumonia.

Shortly after Frey’s death, the group’s manager Irving Azoff told TheWrap that the musician’s medication played a part in his demise.

Azoff had no comment for TheWrap on Henley’s Montreal Gazette interview.