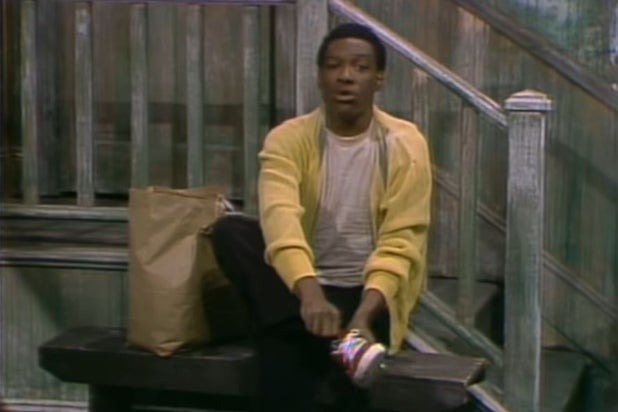 When Eddie Murphy makes his long-awaited “SNL” return on Saturday, fans of the venerable late-night staple can thank the comedian’s tenure during the early 1980s for keeping the show alive.

Aside from a brief appearance during the show’s 40th anniversary celebration in 2015, this will be the first time Murphy has returned to “SNL” since 1984, the same year he left (He left in the spring of 1984, but hosted that fall). But if it wasn’t for Murphy, “SNL” probably would have never made it alive out of that decade.

For a brief period in the early 1980s, Lorne Michaels left “SNL” following disputes with network executives. Although he eventually returned in 1985, Lorne’s absence from the halls of Studio 8H were some of the most turbulent years for the long-running show. Following the short-lived run under Jean Doumanian — who lasted just 10 months, ending after Charlie Rocket said “F—” during the live broadcast — Dick Ebersol was brought in to steer the ship.

At the time, it was a last-ditch attempt by former NBC president Brandon Tartikoff to keep the show from getting canceled.

Although Ebersol — who is known for more for building up NBC Sports — had a commercially successful tenure, it was primarily because of Murphy’s breakout status in the early 1980s, with recurring characters and sketches including Gumby, Mister Robinson’s Neighborhood and Buckwheat. Murphy’s star turn helped usher the show out of the long shadow cast by the original “Not Ready for Primetime Players” from the show’s celebrated five-year run in the late-1970s.

James Andrew Miller and Tom Shales’ “SNL” oral history, “Live From New York,” documents just how much Murphy kept the lights on during those years. “During those two years [’81-’83], Eddie, [David] Sheffield, and [Barry] Blaustein had as much to do with keeping the show alive as anything or anyone,” Ebersol admitted in the book.

Murphy was first hired under Doumanian as a featured player for the 1980-81 season, though he was sparingly used. According to Elliot Wald, a writer at the time: “Doumanian hired Eddie, but it was Ebersol who immediately realized that he was going to be a star.” According to longtime “SNL” veteran Jim Downey, it was Ebersol who “developed the playbook” that the show would end up using the decades to come: “the popular characters in heavy rotation,” he told Miller and Shales. “Ebersol made no bones: ‘I’m pushing Eddie Murphy, there’s going to be a ‘Mister Robinson’s Neighborhood’ or a Buckwheat every other show in alternation.'”

Also Read: 'SNL': McKinnon as Greta Thunberg and a Magic Snowman Unite to Bum Everyone Out for Christmas (Video)

As with all other “SNL” breakouts, however, eventually Murphy’s meteoric rise to stardom eclipsed his desire to remain with the show. At the end of 1982, “48 Hrs” hit theaters and he was filming “Trading Places” in early 1983.

“It was going to be pretty hard to hold on to him. We had him for one more year,” Ebersol said. “So I came up with this idea that, for the 1983-84 season, which would be his last, he had to appear in ten shows, and I think that year we were committed to doing twenty. He had to appear in 10 of the 20 and we would be done with him by March.”

That they were able to keep Murphy involved with the show, even if he was only there around half the time, was enough of a bandage until “SNL” could figure out what to do next.

After Murphy left in 1984, the show was retooled, again, with comedy vets like Billy Crystal and Martin Short, which went against the initial idea of “SNL” of featuring unknown, up-and-comers. But it was enough to get the show to the next year, which by then Lorne Michaels had returned. You know what happened next.

But despite Murphy’s celebrated tenure, you probably haven’t seen much of his time if you were born after the 1980s, unless you scour the internet for clips. Said former writer Andrew Smith in “Live From New York”: “Lorne rules the reruns now. Any clips or anything like that, it’s as if the Ebersol years didn’t exist. Once in awhile he’ll throw in an Eddie Murphy, but whenever there’s a clip show, it’s like those years of Ebersol’s just disappear.”

Murphy has largely stayed away from “SNL,” aside from that brief appearance in 2015.

The popular theory for the reason has to do with a joke made by David Spade in 1995 during his “Hollywood Minute” segment on “Weekend Update.” Referencing Murphy’s “A Vampire in Brooklyn, which bombed at box office, Spade said “Look, kids, a falling star! Quick, make a wish…” Murphy was said to be irate at the dig, considering all he did to prop up “SNL” when it was consistently on the verge of cancellation.

(For the record: A previous version of this article incorrectly stated that Saturday will be Murphy’s first time hosting. He hosted in Dec. of 1984.)