Eli Roth sat on the balcony of the Carlton Hotel on the Croisette, while the waves of the French Riviera took on a magical glow in the sunlight behind him. He reveled in the glamorous backdrop. 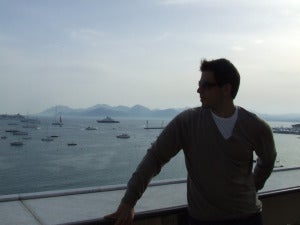 "I’ve been to Cannes on the outside and the epicenter," he said. "Eight years ago, it was exciting just to sneak into a party. Now, it’s wonderful to think, ‘This is my party.’"

And what a party. Roth appears along Brad Pitt in Quentin Tarantino’s "Inglourious Basterds," which premiered in the main competition earlier this week. As a soldier nicknamed "The Bear Jew," Roth plays a member of the eponymous Nazi hunters intent on murdering killing and scalping as many Third Reich villains as possible.

For Roth, a filmmaker best known for directing the "Hostel" torture-porn movies, stepping in front of the camera under these circumstances signaled a major new opportunity.

"Quentin recognized a side of me that wanted to be an actor," he says. "I never wanted to be in somebody else’s movies, but he knew that I had it in me. He said, ‘I’m going to put you alongside the biggest movie star in the world, and you’re gonna be great. I decided, ‘If I’m going to appear alongside Brad Pitt, I’ve gotta look like I’m in the same movie as him. When I bet [a Nazi] to death, it can’t just be Eli Roth looking funny and crazy. It’s got to be real."

As a result, Roth has noticably buffed up since his last public appearances to promote "Hostel 2."

It helps to look good in Cannes, where cameras follow actors at every waking moment. When Roth first attended the festival in 2001, however, nobody paid much attention. He tagged along with his mentor, David Lynch, when the filmmaker brought "Mulholland Drive" to the main competition. Roth crashed with a family in Gras, where he stayed for an exchange student program in his teens, and rode down to the festival to build interest at the market for his first feature, "Cabin Fever."

"I didn’t really understand what it was or how it worked," he says. "We walked around, hustling, trying to get into parties, weasling market badges."

Although Roth managed to land a number of meetings, nobody signed a deal for him — but the experience helped when he went into production. "Certain people liked it, but their bosses didn’t for it," he said. "But, when I was shooting it, it made me think of the photography I needed for the poster, and how I was going to market it. It forced me to rethink making the movie from the point of view of selling it.

"When were at the Toronto Film Festival [with ‘Cabin Fever’], all those buyers I had met checked it out. We laid the groundwork."

Now that the festival is winding down, Roth plans to return to Los Angeles and shop around an $80 million science-fiction movie, marking a change of pace for man whose career got its initial boost from explicit horror. "After I made ‘Hostel 2,’ I felt like this phase of my career was over," he says. " But I will go back to doing movies like that. It’s just a feeling."

In 2007, he was attached to direct an adaptation of Stephen King’s epic zombie thriller "Cell," but later dropped out. "I walked away from it," he says. "I love Stephen King and I love the book, but Iwant to write my own stories."

Meanwhile, his work has had reverberations elsewhere. Lionsgate hired indie horror director Ti West to direct a sequel to "Cabin Fever" several years ago, but the company felt that West’s comic take on the material didn’t work, and it remains unreleased.

Asked if he tried to help the sequel reach fruition, Roth pleads innocent.

"That’s a project I’m not involved with," he says. "I love Ti West, and I can’twait to see it. I’m sure it’s great, but it’s not my business. I’m making my own movies."