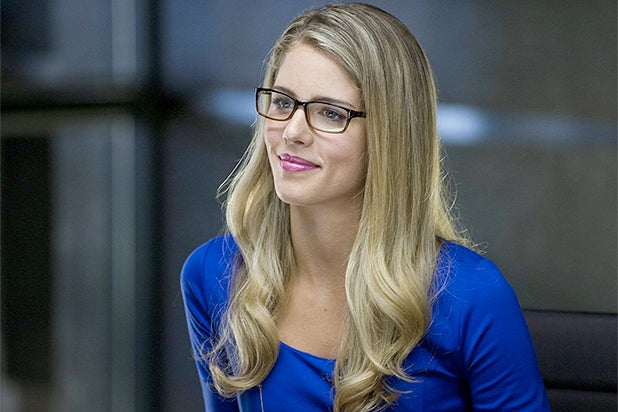 Emily Bett Rickards will return to “Arrow” for the DC Comics superhero series’ final episode, which will air early next year.

“There’ll be a lot of news coming out about our final episode over the next few months. I prefer when you hear it from us. Welcome back Emily,” “Arrow” star Stephen Amell tweeted on Friday. Consulting producer Marc Guggenheim added: “We couldn’t be happier or more thrilled. No other way to do our finale. You’ll find our about more old friends returning in the coming weeks.”

Rickards played Felicity Smoak on the CW drama’s first seven seasons and departed ahead of the show’s eighth and final run this year. She was initially in a recurring capacity before eventually being promoted to series regular.

“Arrow” is in the middle of its final season, which will serve as the lead-up to the network’s massive “Crisis on Infinite Earths” crossover that will air in December and January. The final episode of “Arrow” will air after the crossover.

Based on DC’s Green Arrow comics, “Arrow” debuted in 2012, the first of The CW’s many superhero shows. The so-called “Arrow-verse” now spans six shows, including “The Flash,” “Legends of Tomorrow,” “Supergirl,” “Black Lightning” and “Batwoman.”

The CW may not be done with “Arrow” once Amell hangs up his bow and arrow for good. The network is developing a spinoff that would take place well into the future, focusing on Queen’s daughter, Mia Smoak (Katherine McNamara) who takes up her father’s mantle. The potential series will get a backdoor pilot, which would see McNamara star in the new series with Katie Cassidy and Juliana Harkavy, who have portrayed two different versions of Black Canary (now known as “The Canaries”).

The CW is also developing a “Supergirl” spinoff that would focus on her more famous cousin, Superman (Tyler Hochelin) and Lois Lane, and the duo’s attempt at domestic bless.