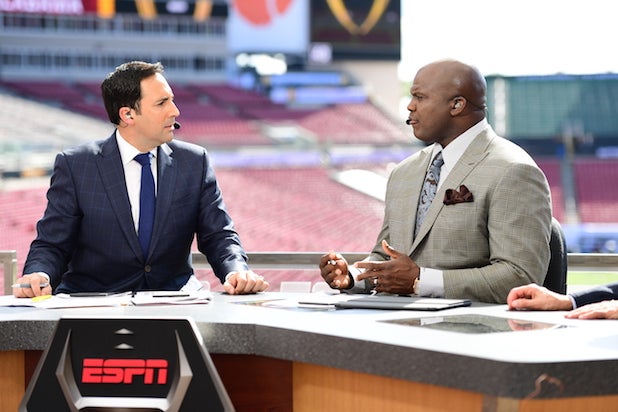 Jason Witten might be gone, but Joe Tessitore and Booger McFarland are returning for the 50th season of “Monday Night Football,” ESPN announced on Wednesday morning.

ESPN also announced on Wednesday that it has signed Lisa Salters to a new multi-year deal, allowing the Emmy-winner to return for her eighth season as sideline reporter on “MNF.” NFL “officiating analyst” John Parry will be joining “MNF’ for his first season in 2019, ESPN added.

“We’re all excited to kick off the 50th season of ‘Monday Night Football’ and I am especially happy for Booger whose unique talent and uncommon perspective will now be showcased even more prominently in his new role,” Tessitore said in a statement Wednesday. “With Lisa and the addition of Super Bowl referee John Parry, our goal is simple: serve the fan by documenting the event and celebrating the game as best we can.”

There’s been plenty of speculation that ESPN might change up its “MNF” crew ever since Witten ended his one year retirement and returned to the Dallas Cowboys earlier this year. Peyton Manning’s name has been thrown around as a potential replacement for Witten, but clearly the “worldwide leader in sports” has decided to run back the same team from last year, minus Witten.

Critics had bashed the 2018 “MNF” crew for its sometimes-clunky execution and rapport, with Witten, the 11-time Pro Bowl tight end, receiving the most barbs.

“For Witten, the weirdest thing about doing ‘Monday Night Football’ was the criticism,” The Ringer’s Bryan Curtis recently wrote. “Witten had never gotten bad press in his life. Now, on TV, he was getting his a– kicked on Twitter every week.”

Despite the harsh reception, the “MNF” trio of Tessitore-McFarland-Witten didn’t seem to scare off viewers, with the show’s ratings up nearly 10 percent last year compared to 2017.