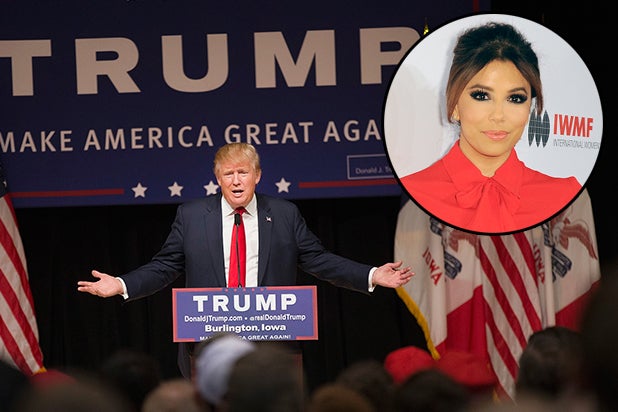 Actress, filmmaker and activist Eva Longoria thinks the people campaigning to have Donald Trump dumped as host of “Saturday Night Live” are going about it the wrong way.

“This is part of freedom of speech, freedom of press,” Longoria told TheWrap’s editor-in-chief Sharon Waxman backstage at the International Women’s Media Foundation’s 2015 Courage in Journalism Awards benefit in Beverly Hills on Tuesday night. “He has his right — not only that, [executive producer] Lorne Michaels has a right to book whoever he wants.”

Several Hispanic groups have urged NBC to drop the Republican presidential candidate as host of the show’s Nov. 7 episode, after he described undocumented immigrants as “rapists” in his campaign announcement speech.

But Longoria says rather than call for the show or NBC to drop Trump, she is urging those opposed to the decision to boycott the episode instead.

“We as a Hispanic community have a choice to not watch it. That’s our choice,” she said. “That’s what we can do. That’s what you’re supposed to do. Boycott that night, and then let that show feel that ‘oh, OK we did make a bad decision.’ You cannot limit that choice to producers or a network. That’s their choice to do that. But what you can do is [say], ‘OK you made that choice, therefore we will do this.'”

The actress, who will next star in the NBC series “Hot & Bothered,” is a self-proclaimed supporter of Hillary Clinton, and stressed that there are two sides to every argument.

Longoria also attributed the “circus” of the Republican primaries for the 2016 election to the number of candidates, not Trump in particular.

Listen to the audio below.