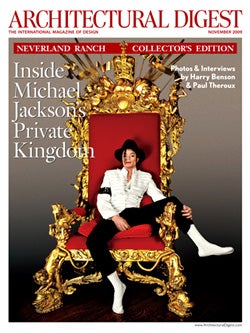 Thought the seemingly never-ending spate of Michael Jackson issues were over? Think again!

The November issue of Architectural Digest – yes, that – is devoted to Jackson’s Neverland Ranch. The 13,000 square foot estate was built in 1982 by real estate developer William Bone, who sold it to Jackson six years later.

The photos were shot by photographer Harry Benson (who by his account, gave the King of Pop no less than three tweed jackets off his back since first meeting him in 1984: “When I saw Michael in 1995, again my tweed jacket was coveted, so again I gave it to him.”)

But if you’re looking for recent photos – say, within the last 20 years – you won’t find them here:

These pictures are of the residence as it was when Michael Jackson bought it from Bone in 1988, completely furnished, and just the way he lived in it for many years. Jackson named it Neverland, added some furniture and many paintings to the interior and transformed the grounds into his very own amusement park. Of course, the King of Pop also added a throne.

Does it smack of desperation? Of course. But everyone’s doing it. And, apparently, with good reason.

According to one study, through September, magazine publishers had cashed in to the tune of $55 million on Jackson’s death. (The report, released by the Magazine Information Network, estimates that publishers had sold $67 million worth of Jackson tribute issues.)

Condé Nast, which publishes Architectural Digest, has had a brutal year; its ad revenue is projected to be down roughly $1 billion when the smoke clears.

And Architectural Digest’s ad pages? Through September, they’re down 49 percent – the most of any Condé Nast title still being published.

Bonus for reading this far — here’s something, via the Neverland Story, I did not know: Bubbles the Chimp “is now 26 and lives at the Center for Great Apes in Wauchula, Florida.”